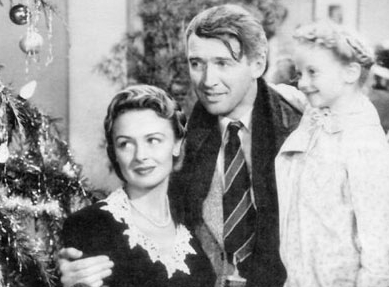 Read the full article, linked above for some yuletide giggles. Finished? Good.

What I find surprising is that the tone of it is surprised, as in ‘Look how loony the FBI was back then! As if Capra was a Red!”

The point for me is that ‘IAWL’ is, of course, Commie propaganda. Or, to be more accurate, it’s socialist propaganda since I don’t remember much in it about the liquidation of the Kulaks.

But if you take the tirade aimed at Mr. Potter, the importance of community and communal values and practically everything but the enormous dollop of Christian mythology, you’ve got a film that Marx and Engels would probably have shed a tear at.

‘IAWL’ is a film that would never come out of America now. Post-HUAC, the USA was denuded of the creative lefties that powered Hollywood before. Stalin purged the old Bolsheviks, Hitler purged the Jews, gays, disabled and anyone who didn’t like Wagner, America blacklisted and purged many of its most creative, most passionate humanist writers. A few of them ended up in Britain, writing for our films and telly, much as the US ended up with a lot of Jewish scientists during Hitler’s reign of stupid. I always find it hilarious that lefties in America are called ‘liberals’ whereas that’s our term for middle-of-the-road thinkers. They painted their lefties out of even their linguistic history.

If you’ve never seen ‘It’s A Wonderful Life,’ now is the perfect time to nip out to a video shop and get a copy. It really is the best Christmas film ever made. I’ve sat and cried through the end of it countless times. 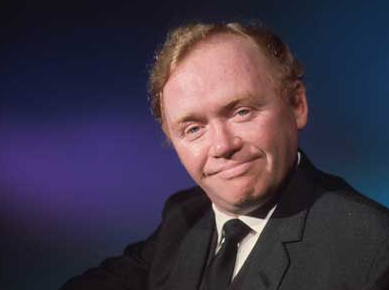 Goodbye, mate. Thanks for some of the funniest moments of my life. More people in Britain think religion causes harm than believe it does good, according to a Guardian/ICM poll published today. It shows that an overwhelming majority see religion as a cause of division and tension – greatly outnumbering the smaller majority who also believe that it can be a force for good.
(Source: The Guardian)

Well, I think anyone who reads this blog even occasionally knows that I’m a materialist and a rationalist. I guess, therefore, I’m an atheist in common parlance. (Although I’ve always had a problem with that word in that it makes theism, the belief in spooky ghosties, the norm. It defines the discourse in favour of supernaturalists.)

There are, of course, many millions of good, kind-hearted people who happen to be Muslims, Christians, Hindus, Jews, pagans or whatever. That isn’t the problem. Indeed, since religion, as Dawkins points out, is largely an accident of birth, those people would still be good and kind-hearted even if they’d been born into a different religion.

When religionists assume that all human good derives from irrational beliefs in ghosties, they do the greatest dis-service to human nature. And they also put the cart before the horse: the best, most noble, most loving parts of all religion come from the great good that is naturally within all humans. Or were all people evil before the birth of Christ / Buddha / Isis?

Similarly, while I broadly agree with the poll results, I think that the capacity for great evil is also within most humans. It doesn’t take a Pope or a mullah to create evil, evil does not spring from organised religion alone. Or were all people perfectly good before the birth of Christ / Buddha / Isis?

But, the pernicious nature of religion is in the way it survives and spreads. Look around you: we’re about to enter a festive binge based upon an ancient Middle-Eastern cult. For the next few days, all our media and a lot of our daily activities will be organised around the birth of a man in Palestine 2000 years ago. That’s a pretty ferocious meme.

In order for religions to flourish, they have to promote themselves. The basic rules for any religion are these:

1. This is the only true faith. All other faiths are blasphemies and their followers heathens.
2. You must indoctrinate your children into this faith (and perhaps mark them as true believers by mutilating their genitals).
3. You must spread this faith. Or you will be punished by the head ghost.

If the members of a religion don’t follow the above rules, that faith will inevitably wither and die. Once a faith gets too liberal, too wishy-washy, too optional then it starts atrophying, much as Anglicanism has in Britain. Yes, most people call themselves Christians but that’s reduced to a cultural background, they’re probably only in church three times in their lives, if that.

Think of faiths as being like bacterial cultures on a petri dish. The dish is the world and its human inhabitants. Although population increases, there is only ever the one dish. If you want more followers, to spread your colony type, you either have to convert un-occupied areas (humans who don’t believe in anything) or subsume an existing colony.

Now, that conversion could be peaceful. But, in practice, it is often violent and confrontational, no matter how allegedly peaceful the deity being worshipped. In fact, if you actually read most of the central religious texts, they often justify genocide of non-believers as God’s work.

It’s only a short hop from there to crashing planes into skyscrapers.

You see, once you believe one irrational thing, your mind becomes capable of being fed more. You’ve relaxed your rationality, you’ve become subservient to a religion which, of course, always demands obedience and defies logical critique. The old men who generally run all the worlds religions don’t take kindly to having their authority questioned. Your job is to shut up and give them your money / your life / other people’s lives.