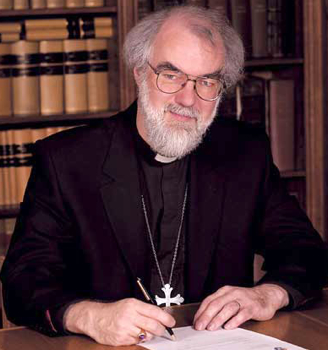 The Archbishop of Canterbury has accused the UK government of placing Christians in the Middle East at risk through its actions in Iraq.

Dr Rowan Williams, head of the Anglican church, said there had been a growing number of attacks on Christians.

Dr Williams told BBC Radio 4’s Today programme there was “no doubt” that life for Christians in Iraq had become more difficult since the invasion.

“The situation has got worse since Saddam fell.”
(Source: BBC News)

The government has already dismissed Williams’ comments, the same as it dismisses (or arrests) every other dissenter. Williams is lucky: at least Blair’s stormtroopers haven’t locked him up. Yet.

Williams has merely stated what every other non-insane commenter believes about Iraq, that the illegal invasion and occupation has been a tragedy for the Iraqi people. The evil dictator Hussein was removed but the result has been a brutal civil war, not democracy.

How will Butcher Blair respond to this message from the Archbishop? Will he still have God whispering in his ear, like Dubya does, telling him all that killing is just dandy?