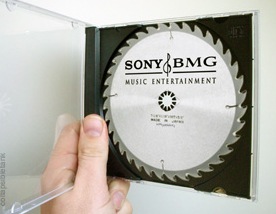 Sony BMG will pay $750,000 in penalties and costs and reimburse California consumers whose computers were harmed by antipiracy software on some CDs sold by the record company, California officials said on Tuesday.
(Source: CNET)

The sheer arrogance of Sony over all this is unbelievable, thinking they have the right to infect public computers with their malware. It’s a typical psychopathic multinational corporate attitude: these organisations believe they are above the law.

I believe Sony’s attitude is linked to their current downturn. Sony used to be one of my favourite manufacturers but after endless trouble with their VAIOs and other over-hyped, over-priced products, I’ve given up on them. Probably why I avoided their recent dabbling in explosive consumer gadgets. I now positively avoid Sony products as I think they’re less well-manufactured, innovative and durable than, say, Samsung.

Sadly, I think Apple are now following Sony’s lead. Look at all the recent auto-rebooting laptop hoo-haa and their arrogant and intransigent response. Not to mention the number of mates I’ve got with faulty Apple products. It would help if Apple weren’t so resolutely un-green. And I won’t even rant about how Apple have ruined what used to be the best sequencer on the planet.

If only evil corporations realised that their evil inevitably hastens their own demise. Perhaps they’d be good for purely selfish economic reasons? Click the pic above to see some frosty pics I snapped this morning. Brrrr!