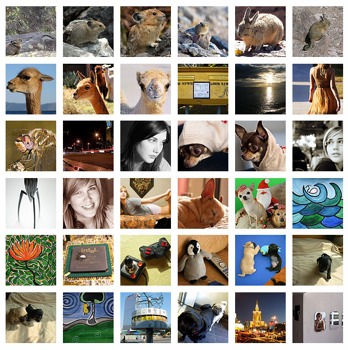 Even though I’ve only been using Flickr for a short while, I’m totally addicted to it. Apart from using it to backup and display my own pics, I spend hours browsing through other users’ shots.

And if you take a look at my Flickr favourites above, you can see what I like: cute animals and gorgeous girls. Yep, I’m totally predictable! 😀 MPs want a 66 per cent pay increase that will take their salaries to £100,000, reports last night claimed.

Labour backbenchers have written to the independent body that sets pay demanding their annual pay – currently £60,277 – be raised to put them in line with GPs, according to the The Sunday Times. The Conservatives have submitted their pay proposal though the 1922 Committee that represents Tory backbenchers.

So, while public-sector workers are told there isn’t enough money for them and that they should tighten their belts, MPs believe they’re worth 66% more. Yep, that £26 million shouldn’t be put into education or the NHS or housing the homeless, it should be put in the already bulging pockets of our government. Maybe they want to goldplate their driveways or something?

How about we take a vote on this?

That would be the democratic solution, rather than the politicians just helping themselves to our taxes like the fuckers always do. I bet a referendum on this issue wouldn’t be in favour of a pay rise. In fact, I’m pretty sure the opposite would be preferred.

But humour me. As a test, say the following to people you meet today:

And let’s see how in touch with the Great British Public our wonderful MPs are.