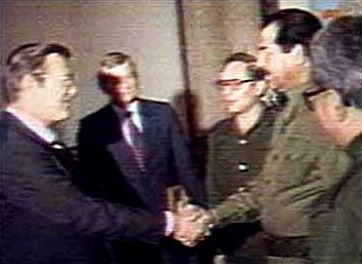 Donald Rumsfeld, who quit as US defence secretary this week, may face criminal charges in Germany for alleged abuses in Guantanamo Bay and Iraq.

A complaint has been launched by the US-based Centre for Constitutional Rights, representing a Saudi detained in Cuba and 11 Iraqis held in Baghdad.

German law allows the pursuit of cases originating anywhere in the world.

The Centre for Constitutional Rights argues that Mr Rumsfeld was instrumental in abuses committed at Guantanamo Bay and at Abu Ghraib jail in Baghdad.

The lawyer group alleges that Mr Rumsfeld personally approved torture to be used to extract information from the prisoners.

It is also seeking to prosecute US Attorney General Alberto Gonzales and former CIA director George Tenet, among others.
(Source: BBC News)