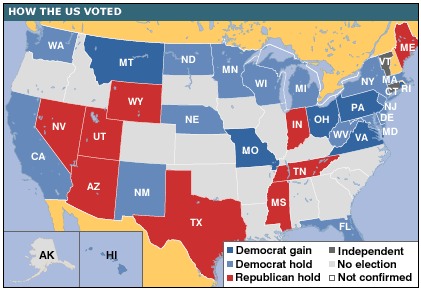 Democrats have gained the final seat in the battle for the US Senate, sealing their mid-term poll victory in both houses of Congress.

The Democrats had already secured the House of Representatives in Tuesday’s elections.

President George W Bush has pledged to work with his rivals, and says he is open to new ideas on Iraq.

He has already accepted the resignation of Defence Secretary Donald Rumsfeld, key architect of US policy in Iraq, following the poll defeat.
(Source: BBC News)

I waited till the Senate results were in. I didn’t want to jump the gun and then witness a “surprise” Republican victory in Virginia.

But I can officially say now: well done, the voters of America!

These election results, coupled with warmonger Rumsfeld’s sacking, are a huge rejection of Bush’s illegal invasion and occupation of Iraq.

I wish that Britons had been as brave as you. I wish we’d given Blair the drubbing at the polls he deserved the last time he asked for our votes. Unfortunately, for the UK and the people of Iraq, we didn’t.

Of course, the Democrats aren’t revolutionary socialists. Both parties are capitalist parties, the Democrats are simply differ in the way they’d manage capitalism – they have no desire to dismantle it. They’re about as left-wing as some sections of our own Tory party:

Let us be 100% clear: the Democrats are a party of, by and for the capitalist class. They are in no way shape or form a reformist social-democratic party of the masses along the lines of the European Social Democracy.
(Source: In Defence of Marxism)

For America, this is a swing to the left, as far as the left exists in a mass-party sense in America. This is a slap in the face for Bush and the neocons. Bush will now be a lame-duck president, no longer able to rely on automatic rubber-stamps from Senate and Congress.

Meanwhile, here in Britain, we still have to suffer under Butcher Blair’s coterie of liars and mass murderers. Every night, some fresh-faced New Labour toady pops up on our news, claiming the moral high ground concerning the issue du jour while dripping with the blood of 655,000 slaughtered Iraqis. Our media doesn’t even raise the war as a topic, arguing that the mass of public opinion doesn’t care about Iraq.

If that’s true, isn’t it about time that we Brits were all more like the Americans?