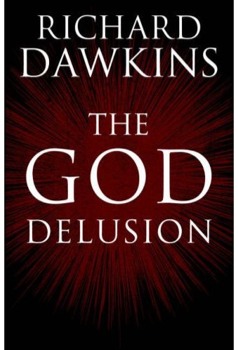 If you only read one book this year, make it this one.

This book couldn’t be more timely or needed. Around us, demagogues like Jack Straw, Bin Laden and Bush attack and defend various religions, always from the perspective that their own religion is, of course, the true one. Whether it’s headscarves or evolution, religion is in our headlines every day. Sectarianism is spreading in our world like an Old Testament plague of boils.

It seems the world is mad. Poisoned by fairytales elevated to the status of truths.

Dawkins’ clear, precise epidemiology of religion is masterful. He doesn’t care whether what he writes will offend Christians, Jews, Muslims, Mormons – whatever it is, he’s against it! (If that “it” is a religion.)

I became an atheist at around eight years old. I suddenly realised that all the prayers we were told to recite, all the inane ritual and rite of religion was claptrap. God, Jesus whoever were exactly as real as Father Christmas, the Great Pumpkin or Spiderman. Judaism and Christianity were dreamt up by genocidal maniacs thousands of years ago. And if you want to know why I say genocidal, have a look at how all-loving God told his people to treat the Midianites, Amorites, Hittites and many other “heathens.”

The God Delusion exposes the horror at the heart of the religious texts followed by the three Abrahamic religions. These polytheistic faiths all stem from texts which encourage genocide, murder, conversion by conquest and the rape of one’s own daughter in preference to consensual homosexuality. Of course, the texts have as many laudable, moral passages as they do vicious, nasty ones but that’s precisely the point that Dawkins raises: should we base our societies on or let them be directed by these incoherent, lunatic myths?

Chapter by chapter, Dawkins takes the (often asinine) questions hurled at him and patiently, logically answers them. From alleged “proofs” of God’s existence (all of them mind-bogglingly stupid) to the old chestnut about Hitler and Stalin being atheists (Hitler was actually a Catholic) and therefore atheism leading to immorality.

He also makes the best point I’ve ever heard about the pernicious influence of religion on children, one which I’ll repeat now:

How can a child be called a “Muslim child” or “Christian child?” How can a child possibly know what religion it believes in? If you met someone that pointed at their six-year-old daughter and said, “She’s a MARXIST child!” or “She’s a REPUBLICAN child,” you would rightly think they’re totally insane and call child protection.

And yet, we let people indoctrinate innocent children, we let them be educated into the most irrational, damaging beliefs in separate schools.

If you can have Muslim or Roman Catholic schools, why can’t you have socialist or Tory schools?

Note that Dawkins isn’t demanding that schools teach an atheist viewpoint, he’s saying that the child should be free to decide for themselves, when they’re old enough. They shouldn’t have any one worldview shoved down their throats. Education should be giving them the tools with which to think rationally about all the possibilities out there and make an informed choice.

But, of course, education is the enemy of religious thought. Religions would wither and die if they didn’t indoctrinate the children of their followers. Religion is, after all, purely an accident of birth. You may be reading this as a devout Christian but if you’d been born three thousand years ago, you would have worshipped another god just as devoutly.

Basically, here are the precepts of all successful religions:

Attached to the above, you’ll often find totally pointless dietary proscriptions, clothing advice and, of course, plenty about what to do with our genitals. Apparently the Creator Of The Universe, of every photon and electron, every galaxy and grain of sand is highly bothered by how often we’re wanking and who we fancy. An amazingly prurient deity, don’t you think?

In the chapter ‘Roots Of Religion,’ Dawkins examines why we’re religious: does the delusion of supernatural forces spring from a biological base? Is there an evolutionary advantage to being religious? The most fascinating part of this chapter is when he relates the rise of cargo cults. After reading this example, any rational person would conclude, as Dawkins does, that Christianity, Judaism and Islam are merely successful variants of these delusions: cargo cults spread worldwide.

As an atheist, I often get asked where I get my morality from. After all, don’t I just make it up as a go along, having no dusty 1000+ year old text to turn to? Dawkins turns this around and shows how, rather than morality growing out of religion, religion grows out of our innate moral sense. This is a startlingly obvious conclusion, unless you’re a fundamentalist and then you sincerely believe any non-follower is damned. Pity about all those millions of humans who lived and died before your pet faith was established, innit?

Reading this book was delightful. After watching what passes for news on my telly, it was refreshing and invigorating. Religion is inimical to our freedom, to our very existence. It enervates our societies, setting human against human, community against community. Where we need to be united simply as humans, religion fractures us into warring, insane shards.

Look around you. It’s a small world, getting smaller every day. Unless we manage to leave, we’re all going to have to learn how to live in peace with each other.

We have to leave the childish, tribal nonsense of religion behind. We have to grow up and start reasoning rather than merely believing.