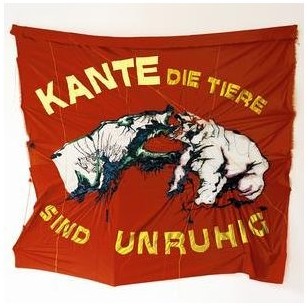 If you’ve been checking my Last.fm page lately, you will have noticed that I’ve been playing the above album to death. It’s Kante’s new album (well, it came out in August, I’m a bit late) and it’s called ‘Die Tiere Sind Unruhig.’ Sadly, my German is rubbish so I had to resort to Babelfish to tell me what that meant. Apparently, the album is called ‘The Animals Are Jerky.’

Kante are a German band that I’ve loved since I picked up their second album, ‘Zweilicht,’ which came out on Kitty Yo years ago. I love that album. Although I shouldn’t like this band at all… let me explain why.

All of the above should make me not like Kante and yet, when I first heard ‘Die Summer der einzelnen Teile,’ I was swept away by the incredibly poppy chorus. I had to sing along.. god knows what I was singing. Then I was drawn into the rest of the album, which was slightly more abstract. But still catchy!

Well, ‘Die Tiere’ is, if anything, poppier than that first Kante record that I heard. Somehow, Kante are always lumped in with the dull post-rock brigade in reviews but they shouldn’t be as Kante are currently one of the best pop bands on this planet. Yep, their songs are very long by pop standards (the shortest one on the new album is 5.16!) but they’re never overlong. Kante songs are as long as they need to be. And the songs are all catchy with loads of catchy bits in-between the other catchiness.

The album kicks off with ‘Die Tiere Sind Unruhig’ which starts off epic and then just gets bigger. This is a beautiful song with one of the biggest choruses I’ve heard in ages. Again, I wish I knew what they were singing so I could sing along 🙁 The middle bit where it breaks down to warm chords and a simple guitar line is haunting. This music is cinematic in the same way that Sigur Ros are but more… rock? It’s far less wistful and more driving. But the soundscape element is definitely there.

Next up is ‘Ich Hab’s Gesehen’ which is far more rocky, in an almost Doors-y way. But Kante pull their usual trick: just when you think you know where the song is going, they stick in a subtle chord change and drag it in another direction completely. This song is the one you could compare most easily with mid-period Queens Of The Stone age or perhaps Wintersleep. How can this band come up with sooo many catchy choruses?

Track three is ‘Nichts Geht Verloren’ (Nothing Is Lost, thank you Babelfish). This has a minutely perfect verse melody that scampers up and down, hooking you without you knowing it. When the big drums and throbbing guitars come in, they only add to the power of the song: that’s already there in the first, quiet verse. The middle of this song is so intense, the build is so well-arranged. The guitars crescendo, intertwined with a descending dissonant string countermelody and then climax in a swooping proclamation. If Kante aren’t already being head-hunted by Hollywood soundtrack specialists then they should be. This band are effortlessly cinematic. This is my current fave song on the album.

‘Die Grösste Party Der Geschichte’ is a more upbeat, happy tune with Kante getting a bit funky, even breaking out a rap. When they get the funk, they do remind me a bit of The Notwist and it’s not just the shared nationality: Kante also flesh out their beats with subtle cross-rhythms and countermelodies. Where the Notwist do it with glitchy electronics, Kante do it in a rock band context but the end result is very light and spare, never funk metal. ‘Die Grösste Party’ is good change of pace, coming at just the right time in the album.

After the party, it’s back to pummelling us with ‘Die Wahrheit.’ The vocal here veers into Fall-like territory for the verses before loping off into the usual immaculate Kante chorus. Again, the reason this song works is the attention Kante give it, the interweaving countermelodies of guitar and bass frame the track without ever overwhelming it with prog excess. Got to love that backwards reverb too… Watch out for the wonky piano coda!

Remember that Notwist comparison I made? Well, ‘Ducks And Daws’ takes me there again, at least for the start of the track. If you’ve heard ‘Moron’ by the Notwist, then the melancholic, jazzy start of ‘Ducks And Daws’ will sound familiar to you. But then Kante take things further, opening up the stage and getting what sounds like a whole jazz orchestra involved. There’s some startlingly disarming clarinet soloing here. And it’s not simply a sheen of jazzness, the micron veneer that’s fashionable in “post-rock” circles, there’s a different feel entirely to the more rock tracks.

And then we have the last track. Yep, only seven songs, 47.59 minutes. But what a 47.59 minutes! ‘Die Hitze Dauert An’ is a sleepy, sombre closer for the album. It has the kind of dreamy feel of Kate Bush’s ‘Cloudbusting’ but the vocal is dry and crisp, standing out from the floatiness. Since this song is driven by crotchet piano chords, the laziest comparison would be to Coldplay. But that’d be like comparing Laurel and Hardy to The Chuckle Brothers: on the one hand you have sublime emotion, deft artistry, on the other, some blokes shouting “to me! to you!”

Congratulations! You, brave reader, have made it to the end of this very long review!

Sorry I went on a bit but I think this album deserves it. It’s easily vaulted its way into my top ten albums of 2006. Maybe it’ll be at number one? Who knows, there’s not that much going on in the indie-guitar-rock world compared to hip hop or electronic. That’s why bands with such ferocious ambition as Kante stand out.

Last night, I watched a chart run down of the top ten albums in Britain. At every entry, I had to shout ‘FUCK OFF! at the screen, never have I seen such a parade of pooh, such a cavalcade of crap, such a melange of mundanity.

Then, I came down this morning and put the Kante album on. And smiled.