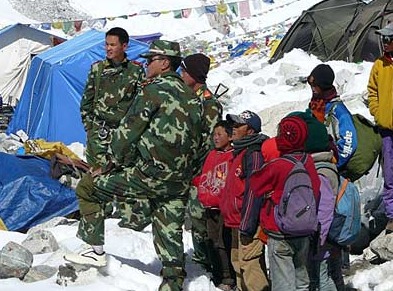 A group of ethnic Tibetans trying to flee Tibet were shot dead by Chinese troops on September 30, at a Himalayan pass near the border of China and Nepal (Tibet is an “autonomous region” of China, having been taken over by the PRC in the 1950s). Reports are emerging that Communist party officials have attempted to silence witnesses, including Western trekkers who were in the area when the killing occurred
(Source: BoingBoing)

Yet more murder from the PRC military. And the same pattern of lying and cover-ups to hide the truth of their slaughter. I find it horrifying that I now take government denials of murder for granted. Whether it’s the US, UK or the Chinese, there’s the same callous dis-regard for human life, the same arrogance and intransigence.

Can there be any such thing as a just and noble government?