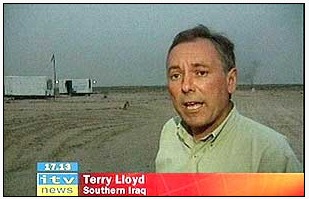 THE family of a British journalist [Terry Lloyd] gunned down in Iraq called for the United States marines who opened fire on his convoy to face murder charges, and branded them “trigger-happy cowboys”.

He was shot in the back by an Iraqi machinegun then, as he was evacuated in a makeshift ambulance, shot again in the head by American forces.

Yesterday Mr Lloyd’s family condemned the Americans who fired on the team as “trigger-happy cowboys” who committed a “despicable, deliberate and vengeful act”.
(Source: Scotsman.com)

When I heard the news about Lloyd, I was stunned. I’ve grown up watching his steady, calm reports. He’s as familiar to me as Walter Cronkite would be to an American.

At first, I thought it must be a friendly fire incident, a horrible tragedy but one of the dangers of being a war correspondent.

But the truth is much darker:

American troops then started firing at both the clearly marked television vehicles driven by the ITN team. Lloyd was killed outright when he was hit in the head by an American bullet as he was being taken for medical treatment by an Iraqi civilian. “I am sure it was the intention of those who opened fire to kill or cause serious injury to those inside the minibus,” Mr Walker said.

“I have no doubt it was the fact that the vehicle stopped to pick up survivors that prompted the Americans to fire at the vehicle.”
(Source: The Independent)

The US troops were deliberately targeting the vehicle precisely because it was being used as an ambulance. Maybe the fact the vehicle was marked clearly that made it a target: all throughout the illegal invasion of Iraq, the US military has frequently murdered journalists not attached to US units.

I doubt we’ll ever learn the truth since the US government and military don’t care what their troops do. They can murder journalists, shoot injured civilians on video, torture prisoners to death and that’s all hunky dory. They and their followers have a Nazi mindset: only the lives of Americans matter. Everyone else is a subhuman and has no rights. As for any investigation:

The Royal Military Police (RMP) carried out an investigation into the incident. Major Kay Roberts, an RMP investigator, testified at the inquest on Terry Lloyd that a videotape of the incident, taken by a cameraman attached to the US unit that killed Terry Lloyd, had been edited before it had been passed on to the British investigation. The RMP forensics expert who examined the tape concluded that about 15 minutes had been removed from the start of the recording. Roberts testified at the inquest that she was sent the tape “many months” after the incident[4] and that the she was told by the US authorities that the footage they handed over was “everything that they had”.
(Source: Wikipedia)

That’s the US army way – if the evidence is damning, just tamper with it. And then have your own whitewash which gives you the result you want:

A US Defence Department spokesman said: “An investigation into the circumstances surrounding the incident was completed in May 2003.

“The investigation determined that US forces followed the applicable rules of engagement.”
(Source: Scotsman.com)

Lloyd’s widow, Lynn, said: “This was not a friendly fire incident or a crossfire incident, it was a despicable, deliberate, vengeful act, particularly as it came many minutes after the initial exchange.”
(Source: The Independent)