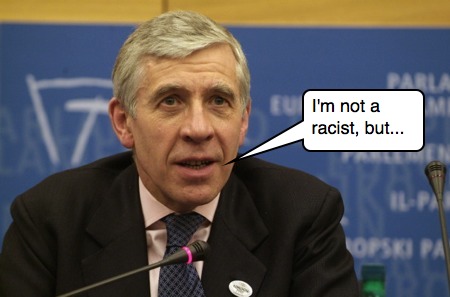 Islamophobic attacks have surged in the past month in the wake of controversial remarks by ministers about British Muslims, say campaign groups.

The rise in verbal and physical assaults includes a spate of incidents in which Muslim women have been abused for wearing veils and scarves. They come in the week that the issue was raised by Jack Straw, the Leader of the Commons.
(Source: The Independent)

Well done, Jack! Your campaign to whip up Islamophobia and racism against brown people in general is working a treat. The BNP are loving the leg-up you’ve given their fascism, they’re even using your attack as the inspiration for a new leaflet campaign.

Of course, Islamophobes aren’t too clever so it isn’t just Muslims that are in trouble:

A Teesside family were also targeted at the weekend after vandals daubed graffiti on their home. The Joacph family were forced to cut short a holiday when neighbours alerted them to the attack on their home in Saltersgill, Middlesbrough. Slogans, including the words “kill Muslims” and “terrorists live here” were painted on walls and doors. Police have condemned the attack on the Joacphs, who say they are practising Roman Catholics.
(Source: The Independent)

Yeah, but they’re brown Catholics, innit? Which is almost Muslim! Which means they must be terrorists or support terrorism, according to our great leaders like Jack Straw and John Reid.

I find it ironic and heartbreaking that this racism is being promulgated by the current leaders of what used to be the Labour party. This party used to be a socialist party. Now it appears to be turning into a National Socialist party…