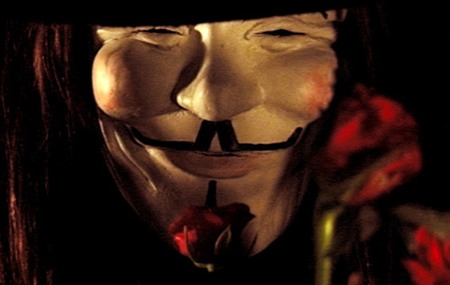 Well, what a surprise!

When I settled down to watch ‘V For Vendetta,’ I wasn’t expecting much. Maligned by one of its creators, dismissed as empty Hollywood flummery in many reviews and then the delayed release in the UK (it’s a 2006 film for us), all of that didn’t bode well.

‘V’ is perhaps the most overtly political populist film I’ve seen since ‘Fahrenheit 911.’ Like that film, ‘V’ is by no means perfect. And the political points it makes are broader than, say, ‘The Weather Underground‘ or ‘Manufacturing Consent.’

But it felt exciting to be watching a big, Hollywood blockbuster that wasn’t yet another unquestioning blow-job to US militarism. Compared to ‘Black Hawk Down,’ ‘V’ is like a lecture by Marcuse.

There are some fine, subtle performances here too. Deeper than the average action-film fare. Without spoiling anything, there’s a particularly haunting scene with Stephen Fry that almost made me blub.

I love the little details in the film. The TV station BTN is a government mouthpiece. On a monitor in the corner of a scene, we see, entirely in passing, a brave Nordic woman being menaced by a stereotypical Muslim, sharpening a knife and cackling. Obviously, in the future, our TV scripts are written by Jack Straw.

It’s all these little touches that make the setting real. And it’s frightening because a lot of the dialogue the fascist ministers are spouting in this alleged work of fantasy is only slightly exaggerated from the language used by the US and UK governments now. This film is too close to the current truth for easy viewing.

Of course, simply because I loved it is no guarantee you will. I watched this film with my history, my experience, so that’s coloured my reception. If you’ve never been a particularly political person, whole swathes of this film may fly over your head. They’ll bore you. And if you are politically minded but you’re a right-winger… well, it’ll probably infuriate you with its relentless logic and appeals to basic human decency.

Why you should watch it:
You’re not a fan of Bush and Blair.
You used to be in the Labour Party but want nothing to do with New Labour.
You enjoy lots of tiny, passing references in films.
You can cope with ambiguity.
You think all politicians are cunts.
You’re a socialist (but not a Stalinist).
You’re an anarchist.
You don’t really know what you are, you just dislike all governments of all flavours.
You know the ‘War On Terror’ is actually a ‘War For Oil.’
You think British imprisonment without trial / charges and Guantanamo are both continuations of Auschwitz.
You’re a Stephen Fry fan.
You believe all human life is equal and priceless and that none is more equal than others.
You’re not an absolute, Gandhi-style pacifist.
You read the graphic novel and enjoyed it.

Why you shouldn’t watch it:
You’re a Stalinist / Nazi.
You’re a nutsoid PNAC-loving Republican.
You’re an arselicking Blairite.
You’re Polly Toynbee.
You’re a New Labour apparatchik.
You think the British and Americans are doing a great job in Eyerak.
You’re old / British enough to know that kids weren’t taking the 11-plus in 1996. (Just found out I’m wrong on this – they were in the south!)
You think politicians do a jolly hard job for not very much money.
You don’t like films that make you think, it makes your poor little brain hurt.
You like films where the goodies and baddies wear big badges to identify who’s who.
You believe in law and order at any cost.
You don’t believe that the US and UK have just killed 665,000 innocent people in Iraq.
You believe that only the lives of you and your countrypeople matter.
You’re an absolute pacifist.
Eggy-in-a-basket.
You read the graphic novel and enjoyed it.
You’re Alan Moore.

Can you guess what mask I’m going to be wearing this Bonfire Night, gentle readers? 😀