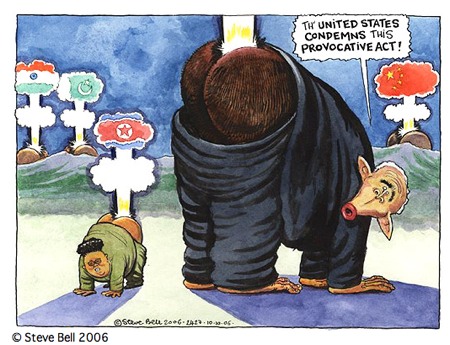 North Korea’s nuclear test is only the latest failure of the west’s proliferation policy. And it demonstrates the need to return to the proven methods of multilateral disarmament. Far from being crazy, the North Korean policy is quite rational. Faced with a US government that believes the communist regime should be removed from the map, the North Koreans pressed ahead with building a deterrent. George Bush stopped the oil supplies to North Korea that had been part of a framework to end its nuclear programme previously agreed with Bill Clinton. Bush had already threatened pre-emptive war – Iraq-style – against a regime he dubbed as belonging to the axis of evil.

The background to North Korea’s test is that, since the end of the cold war, the nuclear states have tried to impose a double standard, hanging on to nuclear weapons for themselves and their friends while denying them to others. Like alcoholics condemning teenage drinking, the nuclear powers have made the spread of nuclear weapons the terror of our age, distracting attention from their own behaviour. Western leaders refuse to accept that our own actions encourage others to follow suit.
(Source: The Guardian)

If you watch the telly news, it’s the same old story: international condemnation of North Korea’s nuke testing. There seems to be a united front of countries leaping on NK for its hideous war-mongering. Although none of these countries are stepping-up to give up their own nuclear weapons.

Before I go further, let me make it clear that I have no love for the North Korean Stalinist regime. And, if I lived there, they would have had me shot or imprisoned a long time ago. I’d be considered a “counter-revolutionary” there, which is a piece of jargon used to dehumanise a person to rob them of their human rights. It makes it easy to torture and kill them. It’s a label of political convenience, you know, like “terrorist,” “insurgent” or “enemy combatant.”

That being said, if you had George W. Bush declaring you to be part of an “axis of evil” and threatening to invade, what would you do? Would you stop your nuke program, the one thing that might prove a deterrent or would you speed it up? Would you want your country to be liberated from oppression as magnificently as Iraq has been?

In fact, I think I might gather the people of Derby together and see what they think about starting a council nuclear weapons program. It’d be just like the Nuclear-Free Zone that Derbyshire used to be in the ’80s. Except the exact opposite. Face it, unless Derby City gets nukes, how can we sure the USA won’t “liberate” us? The only thing America respects is brute force and power: that’s why they’re leaving China alone but invading countries like Iraq with tiny military spending.

The Bush administration made things worse. First, it rejected the policy of controlling armaments through treaties, which had been followed by previous presidents since 1918. Second, it proposed to use military – even nuclear – force in a pre-emptive attack to prevent proliferation. This policy was used as a pretext for attacking Iraq and may now be used on either Iran or North Korea. More pre-emptive war will produce suffering and chaos, while nothing is done about India, Israel and Pakistan. So we are left with a policy of vigilante bravado for which we have sacrificed the proven methods of weapons control.
(Source: The Guardian) 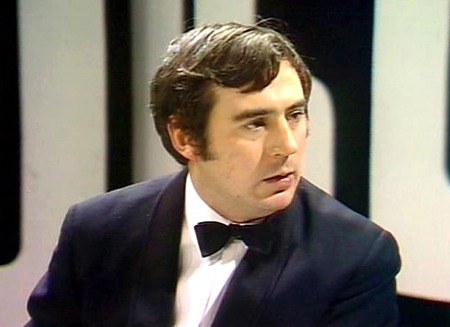 I write to you in my capacity as secretary of the World League of Despots.

It is with great pleasure that I am finally able to extend an official invitation to you to join our ranks. For many years, we have watched your efforts to fulfil the requirements necessary to join our number.

I cannot, however, disguise the fact that we adjudicators were extremely anxious when you announced your intention to remove from office one of our most stalwart members, Mr Saddam Hussein. However, we need not have worried. According to a recent UN report, you have ensured that there are now even more human rights abuses in Iraq than there were under Saddam. No less than 10% of those in custody are being physically or psychologically abused. Well done!

At the end of last month you persuaded the Senate to pass a bill regarding the treatment of detainees. Illegally obtained evidence can now be used against suspects, even if it has been gathered abroad under torture. Anyone you care to accuse can be thrown into prison without the right to a trial or the right to represent themselves.

Officially the legislation is restricted to “enemy combatants”, but you have skilfully adapted this definition to include anyone who has “purposefully and materially supported hostilities against the US”. This presumably means that anyone who publicly criticises your conduct can be defined as supporting hostilities to the US. You are now free to arrest and imprison anyone you don’t like. You’ve got it in the bag!

It is with great pleasure that we in the World League of Despots note that you have now appropriated to yourself all the powers of arbitrary arrest and torture that Saddam once enjoyed. You are now one of us. Congratulations!
(Source: The Guardian)

Read the whole thing at the link above. Nothing I can add to it, really.