War is good for business – invest your son 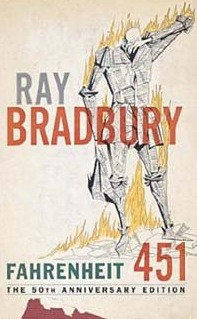 As I read it, I went from mild interest to sheer disbelief. Surely the following has to be made up? :

“Last week, a 15-year-old girl at Caney Creek High School (near Houston) complained to her father [Alton Verm] about “bad language” in Ray Bradbury’s classic SF novel Fahrenheit 451. Dad complained to the district and pushed for the book — which tells the story of a man in a futuristic, totalitarian society whose job is to burn unapproved literature — to be removed from the curriculum. As the icing on the cake, his request came during the last week of September, which just happens to be the American Library Association’s Banned Books Week.”
(Source: BoingBoing)

And the punchline is… the Dad hadn’t even read the book!

“It’s just all kinds of filth,” said Alton Verm, adding that he had not read Fahrenheit 451.
(Source: BoingBoing)

Let’s have a look at the blighters, eh? 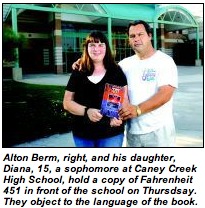 “The words don’t need to be brought out in class. I want to get the book taken out of the class.” He looked through the book and found the following things wrong with the book: discussion of being drunk, smoking cigarettes, violence, “dirty talk,” references to the Bible and using God’s name in vain. He said the book’s material goes against their religions beliefs. The Verms go to Grand Parkway Church in Porter.
(Source: HCN)