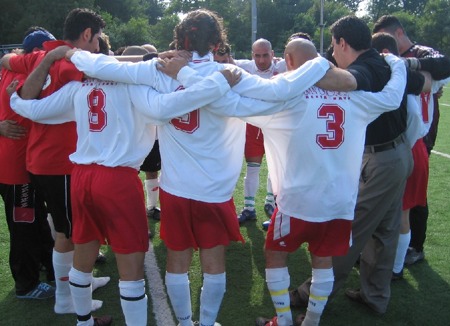 To those of us who knew the pain
of valentines that never came
and those whose names were never called
when choosing sides for basketball
(Janis Ian, ‘At Seventeen‘)

There is grand tradition of manichaean myth when it comes to our schooldays. It’s most expressed in countless US teen films where the plot reliably treads the old geeks versus jocks road. When I were a lad, we didn’t use that kind of slang. A jock was a Scot for a start. I guess swots or spods versus sporty types was our version.

Traditionally, most musicians have come from the spod / geek side of that divide. We’re usually the fat / ugly / spotty / asthmatic / loser / weirdo / brainiac kids. We end up writing songs about the girls / boys we couldn’t get. We feel outcast and marginalised and so a lot of us end up writing songs like ‘Popular‘ and developing a lifelong antipathy to those remembered sporty types.

What is a band but a team? It’s our little team, no different to the teams of footie kids or rugger buggers. We think we’re more individual and free-thinking but we’re no different.

If you start thinking of a band as a football team instead of some kind of fantasy anarchist enclave, a lot of the problems bands have become easily revealed and resolved. Issues of authorship, authority, responsibility, laziness all fall into place.

I know for a lot of musicians reading this, the last thing they want is to think of themselves as a jock / sporty type. But a think about it, think of all the bands you’ve been in. Think of the feeling of elation, total happiness you’ve had after playing a great gig. Isn’t that the same feeling someone has after scoring a goal?

Okay, now I’ve got that one past you, how about my other band theory: being in a band is like going out with (n-1) people at the same time? (n=number of people in the band.)