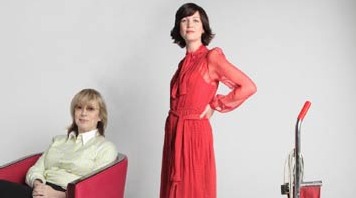 I’m currently watching a prog on BBC2 called ‘Home.’ And I believe I’m watching the finest comedy on British television.

There’s now a plummy voiced interior designer looking at bits of furniture that cost half what my house did. They’ve just had a “rebel” furniture designer on who’s cutting-edge and very daring, apparently. He’s made a chair out of rubber bands. This act of Narodnik sedition will surely have his name at the top of MI5’s list. Oh, how the ruling class must shiver and shake as they hand over £50,000 for one fucking chair.

This series is a classic. They’ve just added a foot to a room by putting blinds up instead of curtains! The designer has obviously solved the intricacies of the Eintstein-Rosen bridge and can now bend spacetime to her will. Hold on, no – she’s just bunged up a mirror to make the room look bigger.

There was a wonderful series in the ’80s/’90s called ‘Signs Of The Times.’ That series simply filmed people talking about their houses and decoration choices. It’s some of the most unintentionally funny TV ever made. Well, I say unintentionally but I’m sure the director knew what was going on.

I suspect the same to be true of ‘Home.’ The interviews have the interviewee talking direct to camera and the last shot is often a prolonged still of the person grimacing uncomfortably. It’s like the end of Police Squad, but with more cushions and dados.

Really, if you’re a fan TV comedy, watch or tape this series. It’s funnier than Boosh and Big Train stitched together.

I’m off now to pay attention to Phillip Starck talking absolute fucking bollocks about a shelf.