C’mon, singalong! “Now at the Central Station, no time for being patient…”

Y’know, it’s hard to experience even one day without having a lorryload of free-market propaganda being shoved down your throat.

It was bad enough in the ’80s when it was only Tories promoting this fantasy, now even Labour spouts the capitalist rhetoric. New Labour has firmly embraced the capitalist lies of efficiency and superiority. All the modern Labour party offers is being better managers of capitalism than the Tories. Real socialism has been pruned from the constitution and the manifestos.

After a while, even an embittered ex-Trot like me can get brainwashed by this farrago of falsehoods, the great lies of capitalism. Maybe the “free market” is the best economic system, the most elegant way of balancing supply and demand? I started to very, very slightly believe the hype.

And then I went to Scandinavia.

I experienced a level of public transport that doesn’t exist in Britain any more. Do you remember when we had a train service that made sense? When the tracks and the trains were under one set of managers rather than spread between two (and more) bickering private enterprises? Do you remember when you could catch a train and it would be safe? What about Paddington, Potters Bar and Hatfield? Follow any of those links and you’ll find the same story: private enterprise putting profits ahead of our safety. They murder us and then get off with a slapped wrist or, occasionally, a big fat golden handshake. Trebles all round for the mis-managers of our glorious privatised transport system.

In Finland and Sweden, they have civilised, modern, spacious, efficient and cheap rail transport. Why? Because the main providers, SJ and VR, are both state-owned companies. That’s right, like good old, much-maligned British Rail used to be. I say much-maligned because Brits have always moaned about the trains. But when we used to moan, it was about horrible sandwiches or tardiness. We actually arrived at our destinations alive, something that apparently isn’t a priority for private enterprise.

Have a look at this train: Nice, innit? I caught that train from Turku to Helsinki and then back again. It had huge, roomy seats, it was spotlessly clean and punctual. The Finns expect their trains to be punctual even if there’s three feet of snow. When I tried to explain how ours are cancelled because of the “wrong kind of leaves on the line” or excessive rain, my Finnish friend thought I was joking. It was only when he saw my pained expression that he realised I wasn’t. He pointed out that Britain is famous for its changeable, often bad weather so why wouldn’t our train system be prepared for this? Quite.

Now have a look at this baby: 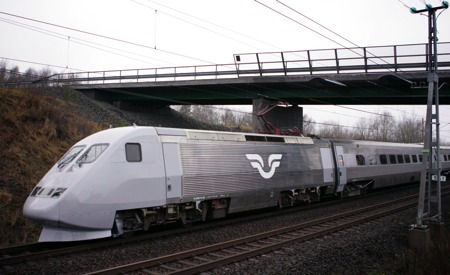 That’s a Swedish X2000 train. It’s the more expensive train Gary and I caught between Gothenburg and Stockholm. Again, the seats were roomy, it was impeccably clean and everything was on time and functional. I’m sure the Swedes on the train wondered why two Brits were looking around in amazement at what is, for them, a normal standard of public transport. We were like paupers in a palace. Swedish and Finnish normal class train travel is better than our first class.

And in Gothenburg? Well, there you have the tram system which, again, pisses on anything we’ve got here. Publically owned, of course. Sweden also has a huge welfare state, the kind New Labour and the Tories are trying to dismantle here. Because of this public spending on public good, Sweden ranks highly or highest in many world stats. It’s certainly far above rapacious free-marketeers like the USA or, now, the UK.

It was on the train back to Gothenburg that I had the revelation: Scandinavia is a parallel reality. Scandinavia is what Britain would have been like today if Thatcher had never happened. If her poisonous selfishness hadn’t become the dominating force in British politics and culture.

Speaking of which, halfway through our trip, I asked Gary what we hadn’t seen. He was puzzled. And then I said, “Beggars.” I asked a couple of Swedes and they said, yeah, of course there are beggars and homeless people. But all I can say is that you don’t see them commonly as you would walking round Derby. I guess the Swedish and Finnish welfare states catch the people that our decimated, ravaged system fails. Before Thatcher, in the ’70s, there were hardly any beggars or homeless on the streets of Britain. After her… well, you know what it’s like if you live here. Every kid sitting at the side of a road in a sleeping bag really is one of Thatcher’s Children. They’re paying the price for one lunatic’s economic wank fantasy.

The sad coda to all this is that Sweden has just elected a right-wing government:

Mr Reinfeldt [leader of the major right-wing party] has pledged to sell state shareholdings in listed companies, and deregulate other areas of the economy in which the state has a large influence. This could clear the way for cross-border mergers or acquisitions of listed companies.

The result means Sweden is set for an historic change of direction as it moves away from being a welfare state towards encouraging more market-based activity.
(Source: FT.com)

More market-based activity, eh? Well, get ready for the train crashes, thieving water companies and all the other chaos of the wonderful free-market system.

Maybe the next time I visit Sweden, it’ll be more like Britain?