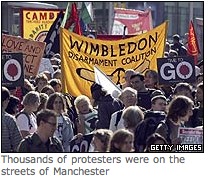 Thousands of anti-war protesters have gathered in Manchester for what organisers said was “one of the biggest mobilisations outside London”.

The theme was “Time To Go” – a call to get troops out of Iraq and Afghanistan.

One of the organisers, Yasmin Ataullah of the British Muslim Initiative, told the BBC they put the figures of demonstrators at 40,000 or higher.

“This is one of the biggest mobilisations outside London and I think there are tens of thousands here – 40 or 50,000 at least,” she said.
(Source: BBC News)

Sadly, I couldn’t make this demo as I’m still a bit peaky after coming back from gigging. It’s a bugger because I would have loved to have taken part today, highlighting the real Blair legacy and taking attention away from the New Labour circus rolling into Manchester.

As usual, I think it’s pretty safe to double or even triple the figures given by the police. And I saw helicopter footage of Manchester on the telly, it looked amazing. The streets were rammed with people demanding an end to our illegal occupation of Iraq and the resignation of Butcher Blair. Funnily enough, this demand was the one that was soft-pedalled in all the major news coverage. It seems like the mass media don’t want to report the depth of loathing the anti-war movement in Britain has for Tony Blair. Curious.

Blair, when will you GO?