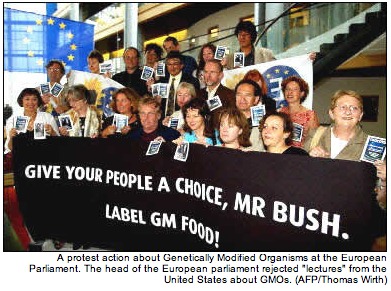 Britons have unwittingly been eating banned GM rice imported from the United States for months, if not years, food safety experts fear.

Imports of the rice were stopped by the European Commission (EC) on Thursday. But investigations in the US show that it has long been “wide-spread” in grain destined to be shipped overseas.

It was first discovered in January that the banned crop, which has never received safety clearance, was contaminating export stocks of long-grain rice. But it was not until nine days ago that the US government informed importing countries.
(Source: The Independent)

Apparently, we’ve been buying this frankenfood since maybe 2001?

Nice of the US government to finally deign to tell us they’ve been breaking our law for five years. Thanks!