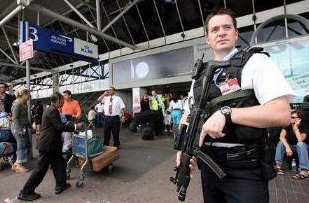 The Tories have gained over the last month while support for Labour has fallen heavily in the wake of the recent alleged terror plot against airlines. An overwhelming majority of voters appear to pin part of the blame for the increased threat on Tony Blair’s policy of intervention in Iraq and Afghanistan.

Ministers – including Mr Blair – have repeatedly denied that there is a connection. But 72%, including 65% of Labour voters, think government policy has made Britain more of a target for terrorists. Only 1% of voters believe the government’s foreign policy has made Britain safer, a devastating finding given that action in Iraq and Afghanistan has been justified in part to defeat Islamist terrorism.
(Source: The Guardian)

These results are from a poll. And the only poll that really counts is an election.

Look at those figures. 72% of people polled thought that Blair’s foreign policy has made us more of a target for terrorism, not less. So his kowtowing to Bush has lost Blair support there.

More significant is this:

The findings will shock many at Westminster who had expected Labour to gain ground following John Reid’s high-profile handling of the alleged plot against transatlantic airlines. Carried out over the past weekend, following the series of terror arrests, the poll shows voters do not believe the government is giving an honest account of the threat facing Britain. Only 20% of all voters, and 26% of Labour voters, say they think the government is telling the truth about the threat, while 21% of voters think the government has actively exaggerated the danger.
(Source: The Guardian)

So, 80% of people polled think the government is lying to them. That’s an impressive lack of confidence during a time when we’re being blown up by terrorists. This is when government support should be at its highest as we all rally round to face a common threat. That’s what John Reid called for last week. But it appears the response is a protracted raspberry.

One fifth of the sample believe that Reid and Blair are actively exaggerating the terror threat. They’ve heard all these stern warnings and exhortations to action before. That time it was Blair and his “45 minutes” claim that turned out to be utterly false.

As I’ve said before, since there were no WMDs in Iraq and Blair lied about that, why should we trust anything he says now?

We know he’ll say anything to weld this country’s foreign policy to Bush’s insane crusade. He’ll do it in his usual smarmy, slimy manner and then he’ll send in his bully-boy Reid to repeat the lies at higher volume. Reid is as arrogant and imperial as Blair is glib and unctuous. They’re quite the double act.

However, if you cry wolf too often, as happened with the imminent threat that wasn’t, you will eventually wear out the patience of the public. They won’t forget hours of chaos at airports and blaring alerts on television. For what? Nothing.

More seriously, loss of confidence in the government leaves us confused and in the dark. The next time there’s an alert, how will we evaluate the warning?

We were bombed by terrorists just over a year ago – Britain is a target for mass murderers, that cannot be denied.

But since our leaders lie to us and play political games with our lives, we have no accurate measure of the threat to us. We need to know this in order to decide if we want to catch that plane or book that holiday.

Is it too much to ask for some truth and clarity instead of New Labour mendacity and spin?