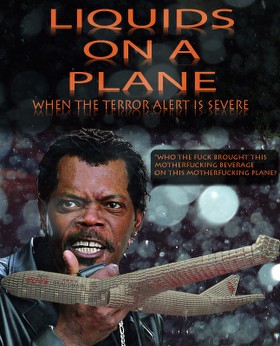 The point of terrorism is to make us afraid. The UK response to a foiled plot is to create an unspecified period during which fliers are arbitrarily deprived of iPods, novels and dignity.

If this is a good idea now, then why won’t it still be a good idea in a year? A decade? After all, terrorist plots will always exist in potentia (can you prove that no terrorist plots are hatching at this moment?) Until they handcuff us all nude to our seats and dart us with tranquilizers, there will always be the possibility that a passenger will do something naughty on a plane (even then, who knows how much semtex and roofing nails a bad guy could hide in his colon?).
(Source: BoingBoing)

Who wants to be blown to bits by a bunch of religious nutters?

But who wants to live in a constant state of fear, whipped-up by politicians keen on pushing through ever more draconian laws that rob us of our freedom?

Nope, not keen on that either.

None of us know how real or invented the foiled terror attacks of two days ago were. Maybe a huge terrorist plot was foiled. Maybe the police, for a change, have arrested people who are in some way connected with terror plots. Maybe this time Blair and his government of liars and murderers weren’t exaggerating the threat in order to shore up their regime.

You see, I find it very hard to trust the boy who cried wolf. Or perhaps that should be the boy who cried WMDs. And used that lie to slaughter 100,000 Iraqis. Blair and his New Labour coterie are proven liars. They’ve lied to Parliament and to this country, dragging us into an illegal war.

Why should I believe them now?

On the other hand, I have no doubt whatsoever that terrorists are aiming at Britain.

Spy chiefs have warned Tony Blair that the war in Iraq has made Britain the target of a terror campaign by Al-Qaeda that will last “for many years to come.”

Yes, thanks to Butcher Blair’s warmongering, we’ve now made ourselves a top target for fundamentalist Muslim terror groups. As you can see from the above, that’s not merely my rabid, lefty opinion. That’s what our intelligence service says – and they’re not known for their Commie leanings.

So, as a result of the actions of John Reid, New Labour’s Tebbit, and his support for our illegal invasion, we’re now in the sights of lunatics like Al Quaeda. That’s why I find it so utterly galling when the same John Reid makes ever more pompous speeches about how we’re all on the same side against terror and should all pull together.

John Reid, I am not on the same side as you. It was you and your government that put us in this position. It was your actions that made us all targets. And now you lecture us on how to deal with the increased terror threat that you created!

But I do believe that Britain will have another terror attack soon. And I know that it could kill me or my family in an instant, even though we’ve never harmed anyone or taken part in any wars.

Isn’t it funny that whether we’re American, Iraqi, Lebanese, Israeli, Palestinian or Britons, our situation is the same. Our glorious leaders exhort us to slaughter the enemy, to never bow down before their “evil.” To sacrifice our freedom, our children, our lives in the fight against them.

But it’s never these leaders who are in danger, is it? It’s us, the poor bloody civilians, who are getting bombed and shot, in our houses and on buses and planes.

Meanwhile, the politicians, generals, and religious leaders sit in comfort, urging us to keep on fighting.