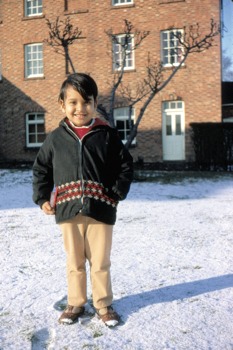 Me in the snow. I can’t believe I was ever this little.

Today, I am 40 years old! Happy Birthday to meeeee!

Yesterday, I finished off the last bits of text to go with the artwork for a 7″ being released by Swedish label Heavenly Pop Hits. I’m also finishing off the artwork for my new album which is coming out on Ninthwave later this year. So, I’m quite happy and productive.

But turning forty inevitably makes you question what you’ve achieved so far. Here’s a brief life-audit:

Although I’ve written around 250+ songs in the past 24 years, I’ve only released three albums and a handful of singles. I wish I’d managed to record and release more – it’s been six years since my last album which is a hell of a long time. Moving house a lot certainly stymies my creative flow.

On the music side, I’m going to try harder to get what I write out there. I guess I’m lucky in that songwriting is never a problem for me: it’s finding avenues for release and ways to perform live that are the problems. On the plus side, I’ve sold around one million records and had a number one in eight countries. So, compared to the average musician, I’ve done pretty well.

Last year I played live again, after a gap of eleven years. It was tremendous fun so I’m doing it again this year. Sweden seems to be my musical spiritual home – the Brit music scene is of little interest to me and vice versa. And Derby… well, let me be diplomatic and say that the Derby music scene isn’t very indiepop friendly. Experimental music / fingertapping yes, simple pop, no. Gothenburg becomes daily more attractive to me as a city to live and work in…

So that’s my work life covered. I’m not going to make you feel icky by delving into my personal life online but I think it’s not too soppy to say I’m happily married to a beautiful woman who’s far more intelligent than me.

Now, how about my health? Well, I could really do with weighing around ten to fifteen stone less than I do. I can achieve this by either chopping my legs off or finally gaining control of my lifelong obesity. It’s been a long struggle: I was first put on a diet when I was eight years old. Thirty-two years of dieting! I won’t say it hasn’t had any result, I’m sure I’d be far fatter if I didn’t exercise and diet as I do. But it can be very dull cutting out sugar, fat, sweets, fizzy drinks and anything tasty. For a food-lover like me, it can make life pretty grey. Inevitably, I break and eat everything lardy within reach. And then balloon and then have to diet again. Gah!

On the other hand, I don’t smoke or drink or wreck my neurochemistry wth drugs so I’m better off than the average person there. 🙂

Release at least five more albums. I don’t think one album every two years is an un-realistic target?
Play live in more countries. As well as Scandinavia, I wouldn’t mind playing in other bits of Europe. I’d love to play in the US but there’s no way I’m submitting to their current Big Brother ID registration procedures.
Record/produce some gorgeous bands. I’d love to have a go at recording some of the Scandi indie bands I’ve heard and played with. They really carry the torch of simple pop music at the minute, Brit indie is going through a bizarre Chas & Dave-with-guitars phase. I hope that right royal barrel of cockney monkeys goes away soon.
Publish a book of naked lady photographs. I love photography, I love naked ladies! What could be a better combination?
Play in someone else’s band. Either synths or guitar bass. I’d like to turn up and just play, no worries about anything but the moment. Plus, it’d be fun to play in musical areas that my own stuff doesn’t cover.
Write a science fiction novel. This one is the most diffcult goals since I currently don’t write fiction at all. But I’ve loved and read SF for the last 32 years so it’s not as if I’d be leaping into something totally alien. Geddit?

Hmmm… only two of those goals are not related to what I currently do. So I’ve either chosen the right profession or I’m very un-adventurous. 🙂

And now, some birthday facts:

I’ve probably spent around 116,800 hours of my life asleep. Around 13 and a bit years. But I sleep less than average so let’s make that 11 years. Still a lot of shuteye.

And that’s the end of the facts since I can’t be arsed to do any more maths.

I guess the strange thing about turning forty is that it seems so old. I don’t feel forty, I feel not much different to when I was thirty. Or even twenty, although I’m a much happier, less crazy person than I was then. Those decades have flown by. In fact, I remember turning ten years old, in ’76, and imagining the decades ahead. I think it was then that I worked out I’d be thirty-four in the year 2000 and that seemed incredibly old back then.

I also remember turning twenty. I’d been songwriting and playing gigs for four years by then and I desperately wanted to be a professional musician. That’s something I’ve known, something I’ve wanted for the last twenty-eight years. My wife says that I’m lucky in that respect, that some people never have such a clear idea of what they want to be. To which I reply, ‘you have to have a dream, if you don’t have a dream, how you going to make a dream come true?’ 🙂

I shall draw this protracted navel-gazing session to a close by saying that it feels fine being forty. More than that, it feels good. I don’t think I’m going to have a mid-life crisis but if you do see me whizzing past you in a Ferrari, blasting out Sonic Youth and wearing ridiculously teenage clothes, cut an old bloke some slack and give me a wave and a smile!