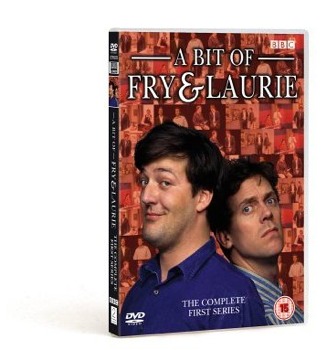 I got the above DVD this morning and it’s ace. But it also made me rather sad at the heinous state of current Brit comedy. What I love about this series is that it’s silly, stupid, satirical and very, very funny. The kid stupid humour of hacked books written by Ted Cunterblast, the oleaginously obsequious barber, Executive Breakfast bars… it’s all marvellous. Where else would you get lines like this?

“Sir has cast me as the mouse in his ever-popular cat drama.”

There’s also a lot of bite in the writing, the kind of political anger that’s totally absent from contemporary British comedy. We don’t have that kind of writing now, we make do with people donning hilarious moustaches and disappearing into endless spirals of “ironic” retro references.

I’m just watching Hugh Laurie singing his America song and you’d never get that kind of criticism of US jingoism now. It’s simply off the comedy menu, along with businessmen, privatisation and celebrity arseholes. Perhaps it’s because we now accept those things as beyond criticism. We don’t see how stupid they are any more. Thatcher won.

There’s also some beautiful poetry that pops up, like:

“She told you about the Bay City Rollers and you were in love with her till the following Wednesday.”

And the best refutation of postmodernism I’ve ever heard:

“Hold the newsreader’s nose squarely, waiter, or friendly milk will countermand my trousers.”

Buy a copy and treat yourself to some fine, hand-carved comedy. From the best goddamn Leisure Centre in Uttoxeter!

EDIT!
I’m now watching a sketch of theirs where they have the ridiculous scene of a capitalist wanting to turn a church into a shopping centre. Ludicrous, eh? Anyway, I’m off to St. Werburghs to buy a corn plaster and a copy of Razzle.