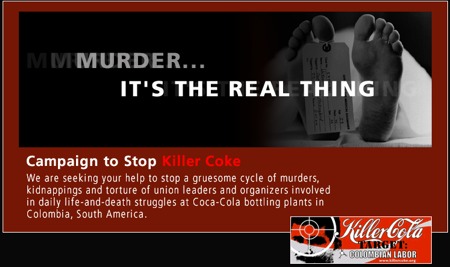 Activists pushing investors to drop shares of Coca Cola stock scored a victory Tuesday when a segment of the nation’s largest pension fund divested from the beverage giant.

Activists had been putting pressure on the educators’ retirement fund TIAA-CREF to drop Coke stock from its Choice Account, a fund set up to cater to socially conscious investors.

Groups like Stop Killer Coke and the Campaign for a Commercial Free Childhood had hoped to send a message to Coca Cola over the beverage company’s marketing to children and its alleged human-rights and environmental abuses abroad.

Workers for Coca Cola Colombia say the company has teamed up with paramilitaries there in an attempt to stem union power through kidnappings, tortured and even murder of labor organizers there. Coke has denied the allegations.

In India, communities near Coke plants have seen their water dry up as the company pumps millions of gallons to make its beverages. The communities have also suffered the destruction of their farmland from lack of water and pollution from the bottling plants.
(Source: The New Standard)

This is a good day for the Stop Killer Coke campaign and a bad day for multinational murderers, Coca Cola. How do you like ’em apples, Jack White, you wheezing anus?