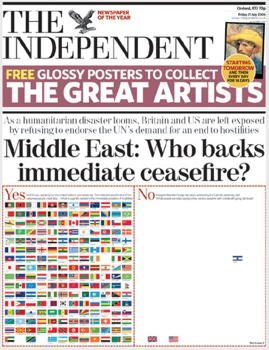 Once again, we see one rule for the US, UK and countries they’re friendly with and another rule for the rest of the world. Look at the picture above and you’ll see how the majority of the world views the current hostilities in the Middle East. On the left, every country that wants an immediate cessation of attacks. On the right, the three countries who don’t: the US, UK and Israel. The US is quietly letting Israel continue its shelling of civilians while at the same time condemning Hizbullah for doing exactly the same thing. When Arabs murder civilians, that’s terrorism. When Israelis murder civilians, that’s legitimate self-defence.

Much has been made in recent days – at the G8 summit and elsewhere – of Israel’s right to retaliate against the capture of its soldiers, or attacks on its troops on its own sovereign territory. Some, such as those in the US administration, seem to believe that Israel has an unqualified licence to hit back at its enemies no matter what the cost. And even those willing to recognise that there may be a problem tend to couch it in terms of Israel’s “disproportionate use of force” rather than its basic right to take military action.

But what is at stake here is not proportionality or the issue of self-defence, but symmetry and equivalence. Israel is staking a claim to the exclusive use of force as an instrument of policy and punishment, and is seeking to deny any opposing state or non-state actor a similar right. It is also largely succeeding in portraying its own “right to self-defence” as beyond question, while denying anyone else the same. And the international community is effectively endorsing Israel’s stance on both counts.

From an Arab point of view this cannot be right. There is no reason in the world why Israel should be able to enter Arab sovereign soil to occupy, destroy, kidnap and eliminate its perceived foes – repeatedly, with impunity and without restraint – while the Arab side cannot do the same. And if the Arab states are unable or unwilling to do so then the job should fall to those who can.

It is important to bear in mind that in both the case of the Hamas raid that led to the invasion of Gaza and the Hizbullah attack that led to the assault on Lebanon it was Israel’s regular armed forces, not its civilians, that were targeted. It is hard to see how this can be filed under the rubric of “terrorism”, rather than a straightforward tactical defeat for Israel’s much-vaunted military machine; one that Israel seems loth to acknowledge.
(Source: The Guardian)

It’s these kind of bald-faced double standards that make a mockery of Bush’s War On Terror. No reasonable person, Israeli, Arab or otherwise, wants their families blown to bits by the actions of lunatics with bombs. But until we value all human lives as being equally valuable, the terror promoters will be able to use the disparity to recruit people to their cause.

And the missiles will keep raining down on both sides, on ordinary people who want no part in any war.