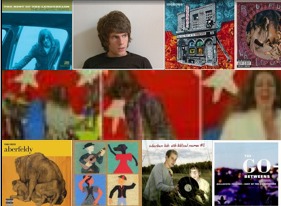 PHEW! WHAT A SCORCHER!

Today seems to be the right day to post up my Super Summer Singalong 2006 CD-comp tracklisting. The temperature today is apparently going to break all previous records. Till the next global-warming record-breaker, of course… I’m hiding inside, away from the sun, like the secret perky goth I am. Curse you, fusing hydrogen ball in the sky! Graaah!

I throughly road-tested this CD, both on the road and with mates. This CD is guaranteed to make you sing along and yelp and clap your hands (if you’re not driving). In fact, it will probably only work as a listening experience in the summer, in a car, with the windows down, the wind in your hair and the pollen in your eyes.

1. The Lucksmiths – Camera-Shy
The lyrics, the harmonies, the ridiculously summery lead guitar riff. You really can’t get more summery than this track. Why are Aussies and Kiwis so good at writing summery tracks? One of my mates suggested that perhaps it’s because it’s always summer down under. Which is wrong on two counts: first, it isn’t. Second – how come the Swedes are great at summery songs too?

2. Sailor – Glass Of Champagne
When I hear this, I’m instantly a kid again and glued to Top Of The Pops. I’m watching Sailor doing this perfect pop song, part stompalong sea-shanty, part proto-synthpop. All summer!

3. Jens Lekman – I Saw Her In The Anti War Demonstration
Why isn’t Jens as famous as other Swediepop artists? Is it because he’s too gorgeous? Probably. I’m going to Sweden again soon, hopefully I’ll get a chance to fondle him in person. Until then, I’ll make do with his lugubrious crooning on this spangly, sunny charmer. Who else could do that lyric about thighs, eh?

4. The Cure – Just Like Heaven
Do you remember proper goth? Pre-Manson, pre-cyber, pre-metal? Robert Smith does. He remembers velvet jackets, Herman Hesse, Jean Paul Sartre, pretending to have consumption, putting kittens in his pockets and dressing up like a girl. Most of all he remembers that goth used to be an exaggerated exercise in Byrony rather than irony. How else can you explain the godfather of goth writing a stunning love song like this, just bursting with summer?

5. Belle & Sebastian – Funny Little Frog
At the supposed other end of the aesthetic spectrum, we have twee royalty B&S coming out with this tremendously catchy but lyrically rather dark song. I guess you have to look a little further…

6. The Tyde – Too Many Kims
Obviously heavily Felt-influenced, The Tyde have come up with a summer slow-burner here. The chugging guitar, the easy, hooky chorus just rock along. I’m not quite sure what they’re on about but, hey, it’s singable! Their new album is out soon, well worth checking out.

7. The Soviettes – (Do) The Stagger
I had to have something a bit loud and fast here or it’d all get a bit too laid-back. Slipping in The Soviettes works perfectly: how can you not singalong to those HEYs? Just immensely catchy. The only downside is that this track makes you drive faster. So let’s be careful out there, okay?

8. McCarthy – Monetaries
This track has very strong summer associations for me and the sheer energy of it barrels the listener along. Those guitars! Those stupid snare fills! And, yes, I can singalong with it. Took me a while, mind. Damn that Brechtian lyrical style…

9. Someone Still Loves You Boris Yeltsin – Oregon Girl
SSLYBY have crept up on me. The album seemed, at first, yet another okayish indie rock album. But then I found myself humming the songs, especially this bright beauty. Yeah, you can play spot the Weezerisms, the Elliotisms but none of that matters if you’ve got the songs.

10. Split Enz – Six Months In A Leaky Boat
This isn’t just summery, this is standing on a yacht, boxing your binnacle summery. What amazing lyrics, it’s a tiny story unfolding. I defy you not to yelp along at the high bit at the end of the choruses. There’s also something tremendously optimistic about this song, it always cheers me up.

11. Goldspot – Rewind
This almost made my top albums of 2005 list but I’d only recently downloaded it before I compiled the list. Since then, I’ve got a bit hooked on the smoooooth indie pop that Goldspot excel at. I can’t understand why they haven’t become huge popstars in the UK – they’ve patently got the songs. This one builds slowly, a perfect vocal drags you into the story. Soooo singalong!

12. Giant Drag – Kevin is Gay
How can you beat this? No one can deny the power of miaowing along to songs. MIAOW! MIAOWMIAOWMIAOW!

13. The Pursuit Of Happiness – She’s So Young
One of the Lost Pop Bands of the ’80s, I was convinced at the time that TPOH would be bigger than U2. They had perfectly crafted power-pop songs like this one, seemingly hand-carved out of sunbeams and buttercups. They had Todd Rundgren producing. They even got on US telly. But…. well, it’s a shit business. Fortunately, you can now buy all their stuff on CD. Mmmm….buttery guitars!

14. The Go-Betweens – Streets Of Your Town
The intro alone is summer. Those guitar chords, the lazy strumming, that acoustic solo in the middle! Then you have the chorus, which is an almost textbook definition of ‘singalong.’ Hopefully, a new generation of young indie kids will re-discover The Go-Betweens and fall in love along to their songs. The juxtaposition between the happy music and the disturbing lyrics are what makes this song. Summer can be so cruel, after all.

15. Suburban Kids With Biblical Names – Parakit
From my favourite album of last year, ‘Parakit’ is a modern indie classic. It’s got the same sense of nostalgia as The Beatle’s ‘In My Life’ and, like that song, it’s written by a gangly youth rather than an aged cynic. It’s got that crystallised memory of childhood summers embedded in it, a clarity and wistfulness you feel the strongest in your twenties. Excellent use of glockenspiel, a quintessential summer instrument.

16. Gorky’s Zygotic Mynci – Spanish Dance Troupe
We’ll miss you, Gorkys, you poppy bastards. From your early psych madness and singing about fingers to your later, less mushroom-influenced work. This track is breezy and warm, a bit like sitting on a deckchair watching thirty-year-old blokes playing very bad football and getting sunburnt. It’s easy, it’s languid, it’s dipping your toes in the sea. The new Euros Childs album is very lovely, by the way…

17. Aberfeldy – A Friend Like You
I drove through Aberfeldy when I was in Scotland last year. It was okay but not a patch on the band for summeriness. I expect they own that season now and lease it out. If this doesn’t make you sing along, check your pulse.

18. Even As We Speak – Falling Down The Stairs
Another Lost Pop Band, EAWS were/are an amazing Aussie band who produced one of the best pop albums of the ’90s, ‘Feral Pop Frenzy.’ Apparently, they’re back together now and, being very lovely people, you can download this sublimely twangly track from their website by clicking the title above.

19. Rufus Wainwright – California
I like his Dad, I like his sis, I like him. Makes you bleedin’ sick, that much musical talent in one family, innit? I try my best to singalong to this and though I always fail (as he’s a bastard good singer), the failing is always tremendous fun. This track is the best for driving along, pretending you’re in a scene from the OC. Or Coro. But that’s not as summery.

20. The Mekons – Ghosts Of American Astronauts
This is a twilight summer song. I remember driving along, years ago, with a mixtape on and this song came on. The sun was boiling off the roads, the sky was on the edge and this song fitted perfectly. I love the phasing… though it’s a bit freaky. Some of the loveliest lyrical imagery I’ve ever heard.

21. The Banana Splits – Tra-La-La Song
I guess this selection won’t mean anything if you’re under thirty. But for the rest of us, this song is sun, sand and people dressed up in silly costumes driving beach buggies. God, I used to love this show. SIZE OF AN ANT!

22. Agent Simple – Brother
Great lyrics, summery strummery, proper pop crooning, it can only be Agent Simple. One day, this man will famous. And then I shall yell, “I told you so!” at you and be very, very smug.

23. The Lemonheads – If I Could Talk I’d Tell You
I never get tired of singing this. I don’t know why – I guess it’s that you can do silly harmonies, add bits, whatever. It’s sooo catchy and so deceptively simple. I think the organ in the background is what pushes it properly into summer from spring. Yep.

24. The Barracudas – Summer Fun
Yep. Can’t really follow my remit any more closely than by putting this track on.

25. Fishmonkeyman – If I Told You Once
Another band who did very singalong tunes, perfect for singing in the car. The ony issue I have with this track is trying to sing, ‘for the thousandth time.’ But that’s because I have a lisp. A great little pop song, which you can download from their site by clicking above.

There you go. 25 tracks, 74 minutes. Put your shades on, grab your hairbrush and get singing!