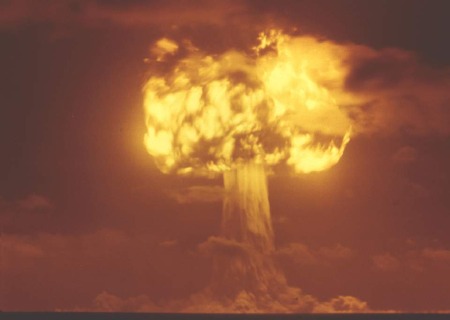 The situation in the Middle East is escalating into a very dangerous international crisis. In response to the capture of one of its soldiers, the Israeli Government has inflicted collective punishment on all the people of Gaza. Israel has:
• Killed dozens of civilians, including many children;
• Deprived the Gaza population of electricity and water ;
• Traumatised people by flying jets which deliberately shatter the sound barrier low over urban areas;
• Kidnapped and imprisoned democratically elected politicians
• Blockaded and bombed Lebanon.
(Source: Stop The War)

Hezbollah fires rockets at Israel, Israel strafes everything in sight. This could easily escalate. I reckon it’s time we learned to Duck And Cover again…

Can someone please find me a planet with no nutters on it, religious or political? Just somewhere nice that affable, ordinary, peace-loving people can move to. We’ll grumble a bit about the weather and perhaps give a hard stare to anyone cutting us up in traffic. But we won’t resort to launching rocket attacks or suchlike.

Perhaps now would be a good time to tell your Mum and Dad how much you love them. And while you’re at it, make a pass at that pretty boy/girl you’ve been scared to talk to.