Our wonderful police, protecting our freedom every day…

My friend Phil and I were going through a metal detector on the way out of Highbury & Islington tube on Friday evening around 8.30pm, on our way to a gig. Phil, who has a degree in physics, said to me in a low voice that the metal detector was a “piece of shit that wouldn’t stop anyone”. Obviously, someone was listening, as all of a sudden, half a dozen policemen jumped on him and hustled him over to the corner of the tube station, where he was detained for about 20 minutes for the grave crime of swearing in public, and fined £80 for the privilege. For swearing! On the tube! If it’s such a crime, then I owe them about a million pounds, as swearing on and at the tube is the only way to deal with the pain of having to travel on the dratted thing every day.

The police were fucking rude, too, and treated Phil like he was a hardened criminal – they were really aggressive, and clearly wanted him to lose his temper so they could charge him with something worse. They said repeatedly he was very close to being arrested. For the terrible crime of swearing and calling their machine a piece of shit – which, as a physics graduate, he actually knows about. Phil co-operated fully and gave them every piece of ID you could think of, and allowed them to search his bag, but that wasn’t enough for them – they just had to keep on firing questions. I got really upset and started crying through rage, frustration and fear. I also asked them very politely if this was the UK or the People’s Republic of China. They then told me I was very close to being arrested, too.
(Source: The Londonist, via BoingBoing)

Are there any police in London actually tackling serious crime? Or are they too busy arresting loud pensioners, harassing pacifists, shooting innocent civilians and intimidating commuters?

Can you believe that the police are actually meant to be public servants? They’re meant to serve and protect us! 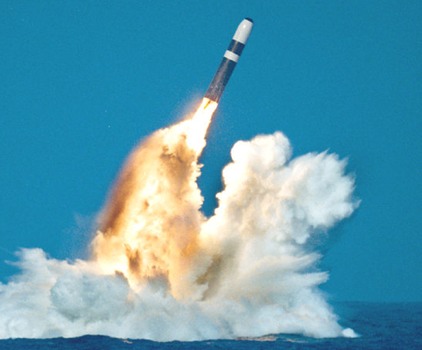 Nineteen bishops have joined the row over the replacement of Britain’s nuclear weapons by warning the Prime Minister that the possession of Trident is “evil” and “profoundly anti-God”.

Religious arguments against the development of a new generation of nuclear weapons could unsettle Tony Blair, who is a regular churchgoer.

The letter says: “Trident and other nuclear arsenals threaten long-term and fatal damage to the global environment and its people. As such, their end is evil and both possession and use profoundly anti-God acts.”

I think it’s wonderful to see powerful religious leaders taking a moral stand about an issue which is crucial for every Briton. Too often, we see religious leaders pontificating about what we should be doing with our genitals and leaving more pressing concerns to one side.

It’s not just that the use of nuclear weapons would leave humanity in tatters and the Earth poisoned for millennia. We have to consider the huge amount of money being poured into these weapons programs, money that could be building hospitals and schools, investing in the life of Britain.

As I’ve asked before, why is it that right-wingers like Blair and Bush only believe in huge public spending if it’s invested in weapons?

Every time I see a weapon like Trident, I think of the sheer waste of money, the mis-allocation of our taxes. And the war corporations who grow fat from our stupidity.