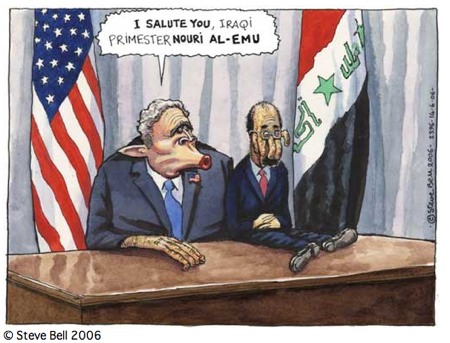 Britons have never had such a low opinion of the leadership of the United States, a YouGov poll shows.

As Americans prepare to celebrate the 230th anniversary of their independence tomorrow, the poll found that only 12 per cent of Britons trust them to act wisely on the global stage. This is half the number who had faith in the Vietnam-scarred White House of 1975.

Most Britons see America as a cruel, vulgar, arrogant society, riven by class and racism, crime-ridden, obsessed with money and led by an incompetent hypocrite.
(Source: Daily Telegraph)

Check the source for that quote: the Torygraph. Yep, not the Guardian, Independent or some other seething hotbed of Sandinistas and Commie baby-eaters, the good old Daily Telegraph.

We all know that the only poll that counts is an election. But I find the level of antipathy for Bush and his warmongering quite remarkable. Bear in mind that Britain is coming up to the one-year anniversary of the London bombing, an occasion I’m sure Butcher Blair will milk relentlessly. Even with that attack, Britons aren’t being fooled by the barrage of lies spewing from Blair and Bush. Every day in Iraq brings more chaos and murder, on all sides. Every day proves how little the US cares about Iraqi lives and how much it cares about Iraqi oil.

And we were dragged into that murder holiday by out glorious leader, Tony the Truthbringer. Lo, did he tell us of the missiles “45 minutes” from impacting on our little heads. And the chemical weapons and the bioweapons and Saddam’s crack troop of sharpshooter dolphins. Wasn’t it all exactly as he foretold?

Of course, once we were in Iraq we got down to the real business of war – cluster-boming the heads off babies:

But Diana was a COMMIE and her Memorial Fund is obviously a front for Trotskyist intellectuals. So all that was hushed-up and kept off the telly.

And so we get to today, where the “leader of the free world” is viewed as an “incompetent hypocrite.”

Now, how the hell did that happen, eh?