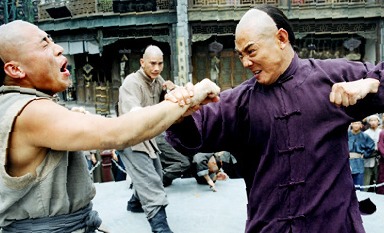 ‘Fearless‘ (English title) is the lastest biopic about Huo Yuanjia. Before I talk about the film, let’s get some of the controversy out of the way:

Jet Li’s latest film, Fearless, is also greatly fictionalized as the stories about Huo’s family and the actual matches were far from reality. The grandson of Huo Yuanjia, Huo Shoujin, filed a lawsuit March 7, 2006, claiming that the movie dishonored Huo Yuanjia by fabricating information about his life and portraying him as a wealthy man who was childless. Huo Yuan Jia’s legacy was carried on by 3 sons and two daughters, and one of his great grand daughters still carries on his legacy as a renowned martial artist.
(Source: Wikipedia)

So, we know the film isn’t factual but is it any good?

DISCLAIMER: I’m not a huge martial arts fanboy. Sure, I like my share of jumping vampires and drunken masters but I am in no way an expert. So I can’t say for certain that Jet Li’s moves are accurate for the period depicted or how much is constructed. Obviously, the bits where he’s flying about probably involve wires.

But from the first few seconds of ‘Fearless,’ I was hooked. It’s a film that moves from high action to higher drama seemingly effortlessly. It starts off at the crux of a contest and then flashes back to the hero’s childhood. As we trace young Yuanjia’s development, there’s some nuanced writing going on, little touches that help establish and explain Huo’s character and the flaw which will prove his undoing. This is the opposite of most “action” films which seem to make do with cardboard stereotypes, patchy sektches of character which never truly involve the viewer.

Jet Li gives his finest performance to date. A performance I could appreciate since the film is subtitled and not dubbed by a gang of bored teens in L.A. Hooray for subtitles! Li’s acting is beautifully detailed. And he’s got a tremendous amount of emotional ground to cover: this isn’t your typical taciturn hero, quick with the kicks and slow with the words. Li makes Huo come alive, warts and all, from his early, arrogant posturing to his later, more humble persona. I’ve seen a lot of films and Li’s acting here rates with the best actors in the best of them.

The story itself is very melodramatic. That term is usually used as an insult but I use it here as a compliment. It’s melodramatic in the same way Indian film can be: the plot and subplots might be seen as too histrionic, too contrived by a Western audience accustomed to more low-octane fare. ‘Fearless’ is bigger than that, its characters are archetypal and its heart is definitely allegorical. You may find some of the plot too overblown, too dramatic. I ate it up! I couldn’t believe how quickly 104 minutes flew by.

As there was some sort of sports tournament taking place (?), I was nearly alone in the cinema, there was only one couple about ten rows ahead. I’m glad because otherwise I might have felt a bit more embarrassed at the bits of the film which made me cry. And there were quite a few of those. There’s just something about the film, the combination of taut story, great acting and utterly ravishing cinematography which battered my emotions. So, yes, like the cliché goes, I laughed, I cheered, I cried.

Maybe it’s an age thing. I think a lot of the subtext of ‘Fearless’ will fly straight over the head of anyone under 25. Fair enough, they’ll still love it as a cool martial arts film. But there’s stuff here that’s older, that connects on levels that are often very personal and painful. Very few of us have been a world-class martial artist but all of us, after a certain age, can look back and shake our heads at youthful intransigence and arrogance. The older you get, the more the ‘what ifs?’ and regrets can haunt you. ‘Fearless’ captures that perspective in a way no other film I’ve seen quite manages, perhaps because it’s all knitted in with a such a dramatic story.

If you’re ready for some meaty story to go along with your kicks and punches, for some philosophy and arse-kicking, go and see ‘Fearless.’

But take a hanky for when, you know, your hayfever starts up…