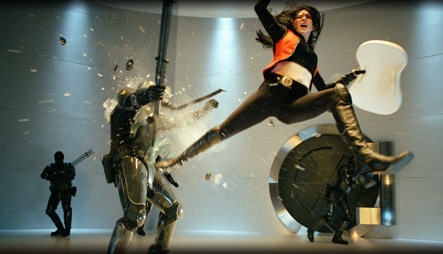 (WARNING! SPOILERS BELOW! DO NOT READ IF YOU HAVEN’T SEEN X-MEN3 OR ULTRAVIOLET!)

I’ve just been to the cinema to see Ultraviolet.

And I want my money back.

It pains me to type that. I try to keep negative reviews off Bzangy because there are far too many blogs that are moanathons. It’s lazily easy to moan, to always find fault with everything. So I steer clear. Normally.

I feel sad saying that because the writer and director, Kurt Wimmer, also made Equilibrium. Now, that was a cool little film. It was basically the story of a future totalitarian government who had banned all art (perhaps they thought it encouraged terrorism?) and the lone man (Christian Bale) who switches sides and kicks their arses. Okay, it was “influenced” by Fahrenheit 451 but it created its own fun little world of Gun Katas and hyperbolic action. Lots of guns, swordplay and glistening, post-Matrix costumes. I enjoyed the film and Bale turned in a great, nuanced performance. It got slagged-off when it was released but I ignored the critics and I’m glad I did.

This time I wasn’t so lucky.

Firstly, they’ve put a horrible smoothing effect on Milla’s face, a moving image version of the extremely airbrushed doll-like images you can find in some magazines. On a woman so naturally ravishing, why? Then the plot… well, that’s about a future totalitarian government and the lone woman (Milla Jojovovich) who kicks their arses. Lots of guns, swordplay and glistening, post-Matrix costumes. Hmmm… so far, so familiar. But the action scenes veer quickly into the ridiculous, Violet keeps getting surrounded by hundreds of heavily-armed assassins and each time kills the lot of them. With her victories coming so easily, there’s no tension so, essentially, no point to the fight scenes. My favourite scene is when the meant-to-be-very-scary Chinese gangsters just shoot the crap out of each other instead of her. Wouldn’t one of them have said, after the first two or three bought it, “Hold on, lads! We’re shooting each other! Let’s all stand in a straight line and shoot at her!”

But wait – Milla’s character, Violet, is a haemophage, some kind of vampirey strand of humanity that resulted from an escaped military gene tweak. Okay, I’ll go along with that. She ends up rescuing a small boy. This boy has, in his blood, the key to the world’s problems: a cure for the haemophage mutation!

Brilliant! Great twist… but… hold on. This seems slightly familiar!

In X-Men 3, there’s a small boy whose blood holds the key to the worlds problems: a cure for the mutation of humans!

That’s right, same plot device, same scrambling around and the same “This isn’t a cure! We don’t need a cure!” and they even got the same boy to play the role. The only difference is that this time he’s got hair.

No doubt you’ll see him soon in another major motion picture as The Small Boy Whose Blood Holds The Key To The World’s Problems. Blimey, talk about typecasting, poor little bleeder.

So the question is – which came first? Did X-Men3 rip-off Wimmer or vice-versa. Or is it a case of parallel evolution? If it’s the latter, it’s even scarier because it reveals the scraping of barrels in Hollywood writer land.

Well, there are twists and turns. A lot of people get amazingly easily killed by the heroine. Jojovovich does the best she can with some decidedly un-flowing dialogue. William Fichtner and Nick Chinlund turn in good performances but it can’t save a film beset by incoherency, wooden words and some of the clunkiest CGI I’ve ever seen.

Again, writing the above doesn’t make me happy. I know that Wimmer can do better, he’s obviously got talent. And films are so subject to committee interference that maybe the movie he had in his head got butchered before it got on the screen.

By the end, Matt Biba and I were just laughing, when we should have been crying. There’s a major confrontation with the Top Baddie and he looks at Violet and shouts:

That kind of sums up this film for me.

Sorry, Ultraviolet cast and crew. You may have been aiming at a fantastic film but that’s not what I saw. Let’s hope you all do better next time.