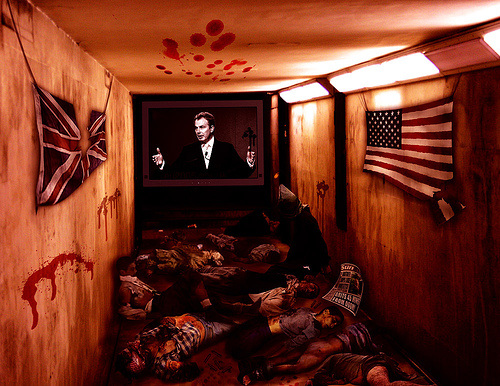 “I don’t think anybody after this is going to be able to say of Tony Blair that he’s somebody who is driven by the drift of public opinion, or focus groups, or opinion polls. He took all of those on. He said that they would be able to take Baghdad without a bloodbath, and that in the end the Iraqis would be celebrating. And on both of those points he has been proved conclusively right. And it would be entirely ungracious, even for his critics not to acknowledge that tonight he stands a larger man and a stronger prime minister as a result.” (Andrew Marr, BBC News at Ten, BBC1, April 9, 2003).

Quote taken from Guardians of Power: The Myth of the Liberal Media

Above is a stunning new piece of photo collage art from Keyvan Minoukadeh. The quote is also part of the piece, I didn’t dig it up. Please click here to see the pic full-size.

PS – This piece also confirms my view that Andrew Marr is a complete fucking idiot. And has been for at least a decade.