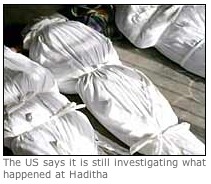 Iraqi PM Nouri Maliki has criticised the US military for what he described as habitual attacks against civilians.

His comments came as his government launched an investigation into an alleged massacre by US marines of up to 24 Iraqi civilians in Haditha.

Mr Maliki told reporters violence against civilians was “common among many of the multinational forces”.

He said many troops had “no respect for citizens, smashing civilian cars and killing on a suspicion or a hunch”.
(Source: BBC News)

I posted about this back in March. Since then, the death toll has risen and yet there is still no international outcry about the murders. There are no in-depth reports on our TV news, no tough questions thrown at government lackeys.

Of course, the US has been here before. During the Vietnam invasion, US troops carried out numerous massacres of civilians, the most infamous being the slaughter of hundreds of women and children at My Lai (covered-up by a young Colin Powell).

And the exact same process of white-wash, disinformation and obfuscation is taking place right now, right in front of our eyes:

The US military has also told the BBC that it is investigating new claims that 11 civilians may have been deliberately killed by US troops in the town of Ishaqi in March.

Video footage obtained by the BBC appears to challenge the US account of the events in Ishaqi, about 100km (60 miles) north of Baghdad.

The US said at the time that four people died during a raid, but Iraqi police said 11 were shot by US troops.

The US authorities said they were involved in a firefight after a tip-off that an al-Qaeda supporter was visiting the house.

According to the Americans, the building collapsed under heavy fire killing four people – a suspect, two women and a child.

But a report filed by Iraqi police accused US troops of rounding up and deliberately shooting 11 people in the house, including five children and four women, before blowing up the building.

The video material obtained by the BBC shows a number of dead adults and children at the site with what our world affairs editor John Simpson says were clearly gunshot wounds.
(Source: BBC News)

The US military reacts to massacres only when it has to, only when it is exposed to the Western mass media. Naturally, as an occupying force, they care about Iraqi opinion about as much as the Nazis cared what the French thought about their occupation.

Look at the quote above, the US is waving all the classic flags here: insurgents, terrorists, al-Qaeda, unfortunate collapse of a building. But the truth is civilians, including five children, were rounded up and murdered in cold blood.

At every turn, the US murders civilians and then weaves threadbare alibis:

On Friday, the brother of a pregnant woman shot dead at a US checkpoint in Iraq told the AFP news agency that he would file a complaint against US forces.

The pregnant Iraqi woman, who was in labour, and her mother, were shot dead by US forces as they rushed to hospital along a closed road, police and relatives say.

US forces said their car “entered a clearly marked prohibited area near coalition troops” in Samarra and failed to heed warnings to stop.

The driver, who was injured, said he had not seen or heard any warnings.
(Source: BBC News)

Under any other circumstances, an incident like the above would cause a storm of international protest. But since it was US soldiers killing a pregnant Iraqi, you won’t hear about it. If you do, it’ll be via the web, TV news won’t touch stories like this. How important is another dead Iraqi compared to kicking a football around?

And so, every day, we are lied to and manipulated and our mass media becomes progressively more distorted and contorted, bending itself into absurd shapes to serve the agenda of the biggest empire on Earth.

So every day, the US carries out more atrocities like those listed above.