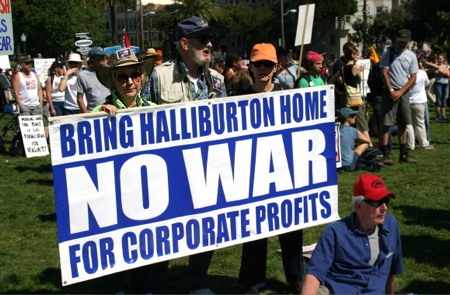 I just got an email from Daniel PandA with a link to the following article:

Almost all local authorities in Britain hold investments in the world’s largest weapons companies, according to figures released under the Freedom of Information Act.

The figures show that they invest £723m in 15 of the largest international arms companies. This is more than double what local authorities spend on promoting local enterprise and new businesses across Britain, says the Campaign Against the Arms Trade, Caat, which conducted the FoI exercise. It found that 67 of Britain’s 99 council pension funds invest nearly £244m in BAE Systems, the UK’s largest arms company. One in three council pension funds help to finance the manufacture of nuclear weapons through investments in Lockheed Martin, the world’s largest arms company, according to Caat. It says they are investing £20m in Lockheed, which manufactures Trident nuclear missiles for the US and Britain and is a contractor at the Aldermaston Atomic Weapons Establishment, which produces and maintains the UK’s nuclear warheads.
(Source: The Guardian)

Is it too much to ask that my council tax doesn’t help murder children? What gives a local council the right to invest money in these companies? There are plenty of ethical investment funds around now that could work as well for them.

And look at this shit:

The study found that 33 councils hold investments worth £33m in Halliburton, the US military services conglomerate whose subsidiaries in Iraq are embroiled in allegations of overpricing and faulty accounting. Halliburton denies the allegations.
(Source: The Guardian)

Halliburton? Why not give my money directly to Satan?

I’m sorry, I’m too angry about this to post anything very coherent or constructive at the moment. Please read the full article, linked above, for the true horror.

And then think, the next time you’re wondering why your bin collection isn’t very good or the bus service is a bit crappy, ‘ah well, it’s far more important to take my council tax money and invest it in blowing Iraqi children to bits.’

Campaign Against the Arms Trade