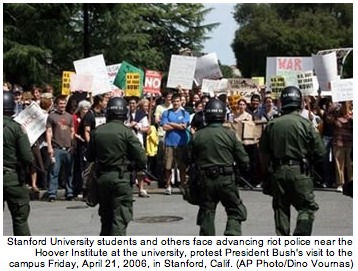 Although President George W. Bush was scheduled to meet with fellows at the Hoover Institution on Friday, the presence of more than 1,000 protestors forced him to change his plans and meet with advisers and faculty members at the residence of former Secretary of State and Hoover Fellow George Shultz on the outskirts of the Stanford campus.

This is the face of America that we never get to see in our British media – the face of protest against Bush, against his Iraq Crusade and against the whole of the anti-liberty establishment he fronts.

It may not be on our tellies but I know, from scouring lefty US websites, that the resistance to Bush’s regime in America is huge. From grand protests like the recent one in LA to comparatively small actions like this one, everyday Americans are fighting to get their country back from the PNAC cabal that is currently running it into the ground.

I love this bit:

Some students, like incoming freshman Alejandra Aponte, said they were surprised by the protest’s high turnout.

“I thought Stanford was really a bubble, but seeing all the people that are out here has shown me that people really are concerned,” she said. “I’m Latina; I’m from Guatemala. Right now President Bush is doing some very interesting things in Latin America. We have a phrase ‘For every pig, there will be a Saturday.’ Basically, his game is over.”
(Source: Common Dreams)

‘For every pig, there will be a Saturday.’ Genius! 😀

Reading the article gave me a warm, fuzzy feeling. These students (and others) got together, planned a hell of a demo and then met and exceeded all their targets. That the president of the USA has to move his meeting to another venue because of this protest shows that there is still the spark of freedom and democracy alive in America, despite the smothering weight of the Patriot Act and every other Bush-instigated attack on freedom.

Which is leads me perfectly into this: 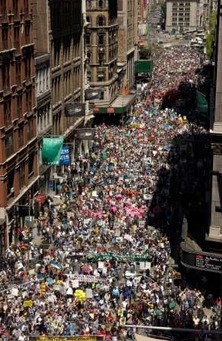