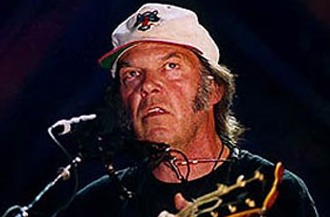 Earlier this year, Neil Young told Rolling Stone,”I’m always going from one extreme to another.” True to form, just months after the release of his studio album Prairie Wind, the legendary singer-songwriter is returning with the incredibly politically charged Living With War. On the album, whipped up in just two angry weeks earlier this month, Young takes aim at the war in Iraq and President Bush — through songs including the Bush-basher “Let’s Impeach the President.”
(Source: Rolling Stone)

Good to see Neil Young not selling-out where he came from. I love angry old hippies. Not that I’m one. Oh no.