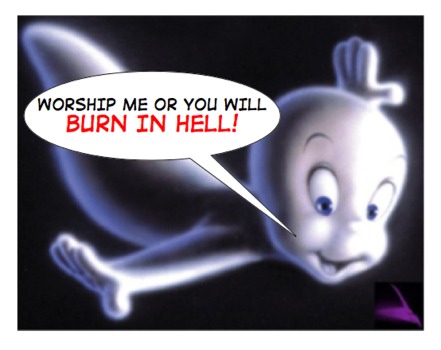 Catholic group Opus Dei has asked for a disclaimer to be placed on the film of The Da Vinci Code, released next month.

The organisation said it had written to Sony Pictures executives in Japan to ask the studio to emphasise that the film was a work of fantasy.

Based on Dan Brown’s novel, The Da Vinci Code claims Jesus Christ married Mary Magdalene and had children, which was covered up by the Catholic Church.

“Some media have written that Sony is examining the possibility of putting at the beginning of the film an announcement to clarify that it is a work of fantasy and that any similarity with reality is purely coincidental,” Opus Dei said in a statement.
(Source: BBC News)

Yes, this seems entirely justified to me. And while we’re at it, can we please add this foreword to the front of every Koran, Veda, Bible and all other religious texts:

What I find most hilarious about Opus Dei’s statement is that they’re perfectly willing to accept that there’s a giant ghost who created everything and then incarnated a bit of himself as a human in order to be brutally killed. But the idea that this human man got married and had kids, that’s fantasy! Walking on water – TRUTH! Kissing a lady – FANTASY!

Christians, Scientologists, Muslims, Jews, Sikhs, Moonies, Hindus, Buddhists, what can you do, eh? Can’t live with them, can’t get them to stop oppressing / slaughtering other humans in the name of their peaceful, all-loving gods….

According to Wikipedia, 16% of the world population isn’t religious. Perhaps it’s time us rational people started complaining every time we have to watch “factual” TV programs that talk about angels or other ghosties. Why should my licence fee go towards paying for ‘Songs Of Praise?’ Where’s my ‘Songs Of Blasphemy And Heresy?’

I tell you, the next time I see God, he’s gonna get such a kicking…