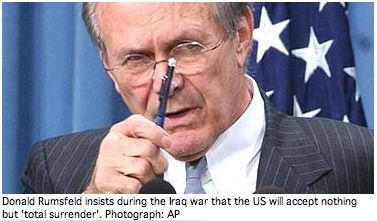 Two more retired US generals called overnight on Donald Rumsfeld to resign as US defence secretary, adding to a deepening rift within the Pentagon.

Six generals – two of whom commanded troops in Iraq – have now called on Mr Rumsfeld to stand down over his leadership of the war.

Retired Major General John Riggs told National Public Radio that Mr Rumsfeld had helped create an atmosphere of “arrogance” among the Pentagon’s civilian leadership. “They only need the military advice when it satisfies their agenda. I think that’s a mistake, and that’s why I think he should resign,” he said.
(Source: The Guardian)

Awwww, poor wittle Rummy! Everyone’s against him! Neocons, lefties, 72% of US troops serving in Iraq. Well, not quite everyone. Bush has, obviously, already issued a defence of his embattled defence secretary.

Typically, these statements by generals haven’t got the coverage they deserve on the mass media. For generals to criticise government officials while a war is still being waged is an enormously unusual situation. These kind of attacks on policy are normally saved for weighty memoirs published decades after the cessation of hostilities.

It’s yet another example of how the America’s disastrous invasion and occupation of Iraq is creating huge fallout back at home. The cracks are beginning to appear in the US ruling classes and cant is being replaced with accusations and blame-dodging.

Those are six pillars of the US military. You don’t get to be an American general by being a tree-hugging Commie, after all. That these military leaders have chosen to lambast US foreign policy proves that the neocon whitewashing of the Iraq crusade is failing drastically. It’s also a pretty sharp warning that the PNAC‘s wet dream of everlasting war may not be shared by the US military.

How will the American right criticise these generals, how will they trivialise their concerns and attack their characters?

How can you wage war when your own generals turn on you?