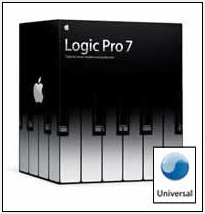 This week, I’ve been mastering my new album. A lot of the tracks are already mixed down as stereo audio, ready to drop into a CD-authoring program. Some of the others are off my AW2400, which is nothing but a constant source of joy and inspiration. But I’ve got a couple I’ve had to return to, to tweak a couple of things. And, unfortunately, these are tracks I recorded in Logic Pro: 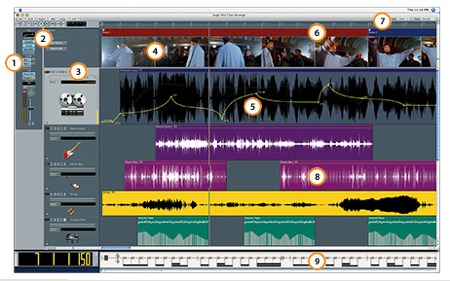 Yes, look at it. It’s all lovely and shiny and menu-ey and plugin-y. The only trouble is…

Once upon a time, Logic was a also a source of joy and inspiration. Back in the days when it was Emagic Logic Audio Platinum, it was the finest software sequencer around. It had rock-solid timing, upgrades that were major improvements and most importantly, a company behind it that cared and was friendly and responsive.

Then Apple bought Logic, re-tagged it ‘Pro’ and apparently decided to fuck it up the arse until it fell apart. The first thing I noticed was appalling MIDI timing. I think that was around version 7 or maybe 7.1. Logic used to promote the MIDI timestamping it enjoyed when connected to an Emagic-made interface. When I investigated the timing, I found out that Logic no longer recognises my AMT8. So, as far as it’s concerned, it’s connected to any old MIDI interface. I checked the various forums and found out it was a “known issue.” Anything being done about it? Any solutions? Nope.

Around this time, I stopped using it for any serious rhythmic sequencing. It was fine for a bit of mixing or tidying up tracks sequenced elsewhere, nothing more.

Then the 7.2 update came out! I bought it because I hoped it would address the MIDI issues.

And that’s when Apple decided to progress from taking the piss to crapping directly on my head.

Yesterday, I opened up a song which, using Logic 7.1, would take around 3 seconds to load. With spangly-new 7.2, it took nine minutes.

After waiting all that time, I tried to load an old EXS-24 patch, one which had worked fine since at least version 7. Spinning beach ball and then… freeze. So I had to reboot.

I loaded the song again. Had a nice cup of tea and a biccy during the nine minutes to re-open the track. Tried EXS. Crash. Reboot.

After this happened four times, I gave up and loaded another song, one that I knew just needed a slight tweak, no new EXS business. Nine minutes passed. Finally, I hit the space bar and…

The screen froze and eventually, after another two minute wait, I got a Core Audio error. Disk too slow, can’t synch. Why, you piece of crap? You managed to play the track perfectly well when you were 7.1! Arggh!

Can you imagine how frustrating this is when you’re trying to get your album done? Music isn’t a hobby for me: it’s my profession. I can’t afford to use tools that lose me entire days of working time due to their gross unreliability.

Again, I went to the forums. Again, it’s apparently a known issue and the cure was to get Project Manager to rescan un-resolved files. So I did that. This time 7.2 found the EXS instruments but it still didn’t play the song without frequent freezes and error popups. Hell, one time it played the song with the drums half-a-bar behind the audio. Kind of makes a mockery of MIDI timestamping, eh?

I’m venting all this because I’m so, so frustrated at what’s happened to Logic. It used to be the hub of my work, tootling along in the background happily, reliably. Now what was once slim usefulness has become shoddy, bug-ridden bloatware. I don’t care about all the fancy plugins if the damn thing can’t even play a song with only 16 tracks of 16bit/44.1KHz properly. It can’t sequence MIDI in time, it can’t play audio – what’s the fucking point of it? And why the hell did I have to go scouring the internet to find a solution to the Project Manager problem, I bought a Mac so I wouldn’t have to engage in that kind of Microsoft-level waste of my time. Why does the “upgrade” to 7.2 break existing songs? That’s not an upgrade, that’s a breakgrade.

So, after I sully myself rescuing the final track from its clutches, this is one Pro User who will never, ever use Logic Pro again. I think this software is completely unsuitable for professionals and I’d advise all but the least serious music hobbyist to steer well clear of it. It’ll suck the money out of your wallet, the hours out of your day and the fun out of your music-making.

Apple, why does everything you touch turn to shit?