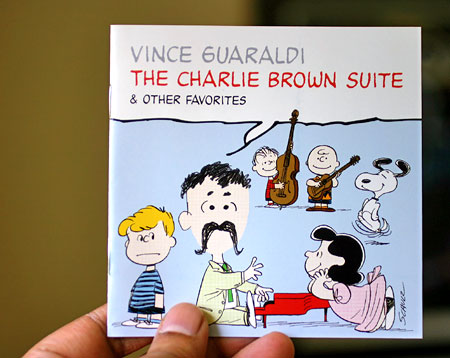 Guess what CD arrived in the post this morning…

Four years later, in the summer of 2003, Vince Guaraldi’s son, David, teamed up with Bluebird Records to release “The Charlie Brown Suite”. The centerpiece selection, long spoken of in reverential tones by fans who only knew of it but never had heard it, is the fully orchestrated “Charlie Brown Suite”, recorded live on May 18, 1969, during a benefit performance with Amici Della Musica (Richard Williams, conductor) at Mr. D’s, a theater/restaurant in San Francisco’s North Beach region. This awesome piece of music clocks in at roughly 40 minutes and skillfully weaves half a dozen songs into an integrated whole: “Linus and Lucy”, “The Great Pumpkin Waltz”, “Peppermint Patty”, “Oh, Good Grief”, “Rain, Rain, Go Away” and “Red Baron”.
(Source: Vince Guaraldi.com)

I grew up reading ‘Peanuts’ and watching all the specials on TV. Basically, if you were a little kid in the 1970s, you couldn’t move without bumping into Snoopy and his roundheaded friend.

A huge part of the reason I loved the TV show’s was Vince Guaraldi’s wonderful music. There’s a depth there and a tenderness that never verges into trite tweeness, as so much of music “for children” sadly does. No wonder I’ve loved Guaraldi’s music for over thirty years.

This CD is a must for any Guaraldi / ‘Peanuts’ fan. But I’d say it’s pretty essential for anyone who loves catchy, jazzy instrumental music. There’s just something about it, I can’t put it into words… it rolls along, sounding so simple but actually there are layers of movement and hinted melodies that draw you in. And what timing the man has! No wonder he was nicknamed Dr. Funk by fellow jazzers.

Buy it and set aside time to listen to it all the way through, no skipping tracks. Let Guaraldi’s music soak into you like summer sunshine and I guarantee you’ll smile.

I don’t think I’m a great piano player”, Vince Guaraldi once said, “but I would like to have people like me, to play pretty tunes and reach the audience. And I hope some of those tunes will become standards. I want to write standards, not just hits”.

He got his wish.
(Source: Vince Guaraldi.com)