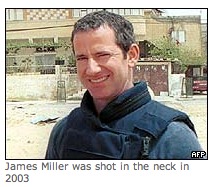 A British cameraman shot dead in the Gaza Strip by an Israeli soldier was murdered, an inquest jury has decided.

James Miller, 34, from Devon, was shot by a soldier from the Israeli Defence Force (IDF) while making a film in a Palestinian refugee camp in 2003.

So, yet again, we have a slight difference of opinion here. The IDF and Israeli Defence Force claim there was no misuse of firearms. Whereas a British jury says it was murder.

The mindset of a murderer is a totally illogical zone. A suicide bomber can calmly board an Israeli bus, sit down next to innocent travellers and then murder them. In their insane, deranged minds, this is somehow justifiable. Similarly, the IDF can shoot innocent Palestinians, bulldoze peace protestors to death and murder journalists without even a flicker of remorse. Opposing sides, identical lunatic, Nazi mindsets.

Of course, the average suicide bomber or Israeli soldier is a mere beginner at murder compared to grand masters like Saddam Hussein or Tony Blair. These men are monsters, smiling and justifying their slaughter of innocents with the kind of arrogant imperiousness that only the criminally insane can muster. Strange that only one of them is on trial for war crimes.

The jury spokeswoman added: “It is a fact that from day one of this inquest the Israeli authorities have not been forthcoming in the investigation into the circumstances surrounding Mr Miller’s death.”

James Miller is dead, murdered by an IDF soldier, a force that, ironically, every day more closely resembles Sturmabteilung. Dissenters are silenced and “all opposition is stamped into the ground.” A world turned upside down?