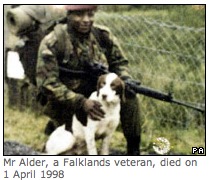 Four police officers were guilty of the most serious neglect of duty over the death of ex-paratrooper Christopher Alder in 1998, a watchdog has ruled.

Mr Alder, 37, who was black, choked at a Hull police station. His sister said after the report that those responsible had still not been held to account

Mr Alder, a father-of-two and a Falklands veteran, was injured during a scuffle outside a Hull city centre hotel and taken to Hull Royal Infirmary for treatment. He was later arrested for an alleged breach of the peace and taken to Queens Gardens police station.

Half an hour later he choked to death on his own blood and vomit as he lay on the floor of the police station, without moving, for 11 minutes with his trousers round his ankles.

“The failure of the officers to explain to the IPCC their actions, including noises recorded on the video before and after Christopher’s arrival in the custody suite appears to have contributed to the IPCC view regarding unwitting racism.”
(Source: BBC News)

So, after eight years, the verdict is in. And, what a surprise, it’s another whitewash.

“Unwitting” racism? What the fuck does that mean? Does that mean you are unaware you hate black people as you watch one die in front of you without lifting a finger. Is the IPCC seriously trying to create a new type of racism here?

The Independent Police Complaints Commission grumbles a bit and wishes its officers would be a little nicer to darkies but, as usual, there is no justice for the man left to die.

Mr Hardwick said he was “disappointed” that the officers directly involved had refused to cooperate with the IPCC review.

He also emphasised the inappropriate behaviour of officers caught on CCTV tapes on the night of Mr Alder’s death.

The footage shows the paratrooper dying with his trousers around his ankles. Monkey noises are heard being made at the beginning of the officers’ shift and after Mr Alder’s death.
(Source: The Guardian)

What would you call a group of men who stand around for 11 minutes watching a black man choke to death on the floor while making monkey noises at him? I’d call them murderers.

This is our wonderful police force, these are our lovely boys in blue.

All of the officers have taken nice, comfortable early retirements on “medical grounds.” Fat pensions all round for them, paid out of our tax money. We’re paying these murderers when they should be behind bars.

Will this news story change anything?

Because the majority of the white population don’t care if the police are racist. It doesn’t affect them, after all. Every time I talk to a white person about these issues I get the same tone back: it’s a tone of disbelief and “oh, they’re not really racist, it’s all exaggerated.” I can talk about cases like Christopher Alder or Babar Ahmad or Stephen Lawrence and it makes no difference.

The British police are racist through and through. There can never be justice in this country while that racism exists. The evidence is overwhelming to all but the willfully blind.

I got this email just now from Danyul Plans And Apologies:

I seriously respect your politcal views and have done throughout the 3/4 years i have known you. However im disapointed with your “Pole jeer as black man dies” article. I agree with everything you say but one sentence is unfair “Every time I talk to a white person about these issues I get the same tone back: it’s a tone of disbelief and “oh, they’re not really racist, it’s all exaggerated.”

I dont know how you scientifically selected these “white people” but i cant ever remember hearing a positive view of the police force from any “white people” i know. Im probably only emailimg you this because on saturday i was entrapped by the police, got the sack and i am also going to have to pay an £80 fine for the privelige. Whilst recounting this story to many “white people” (including my dad who used to be a copper for 15 years) i was met largely with the same response “ahhh welll…they’ll use that money to beat up blacks in the most efficient way possible.”

bullshit aside……i really enjoy your writings on bzangy. I find it hard to find sources on the net that are as biting (and as truthful) as you, written by people who i have respect for

BUT….please dont lump me into a racial category and assume that because of my ethnicity i have some kind of shared politcal outlook with other ‘pale skin honkies.’ I fuckin hate the police, the condition where it became “necessary” and the blatant racism that has occured as a product.

If you changed the sentence to “Every time I talk to a middle class liberal about these issues I get the same tone back: it’s a tone of disbelief and “oh, they’re not really racist, it’s all exaggerated.” then i wouldnt give a shit. Im not asking you to change it..id just like an acknowledgment that not ALL white people are police apologists.

First, I apologise to Danyul. I was very angry when I wrote the above rant and that anger bled through into my wording.

So why did I choose that wording?

It’s based on my experience. It’s completely un-scientific and anecdotal. I have given up talking about police racism in the white circles I know because, in my experience, no-one gives a toss. It may be tut-tutted briefly but there is no passion there, no real anger and I always get the sense that I’m being humoured. Oh, there goes Jyoti, off again!

It’s the same as our invasion of Iraq. Out of all the people I know day to day, only a tiny handful have ever cared enough to protest against it (Danyul being one of them). The rest simply don’t care enough that we’re killing innocent civilians every day. So… I’ve given up talking about the war in public. I rant about it on here precisely because most people’s eyes glaze over if I raise the war in a conversation. But, that doesn’t mean everyone I know doesn’t care, just the vast majority.

If what Danyul says is right about the people he knows, I guess I’m hanging out with the wrong people.