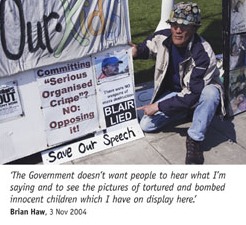 Brian Haw, the anti-war protester who has lived at a one-man peace camp outside Parliament since June 2001, was arrested yesterday on suspicion of obstructing the police.

Mr Haw said the incident began when police tried to confiscate one of his banners. “It’s a beautiful pink banner with large black letters which say ‘Bliar War Criminal’.” Ms Tucker said: “Because it was Mother’s day, I thought I should be down there with Brian, praying for other people’s children.”
(Source: The Independent)

Have you been mugged? Raped? Burgled? Has a crackhead broken into your car and nicked your stereo you saved up ages for?

The police will be onto those cases, right after they finish harrassing Brian Haw. Yep, look at him. Doesn’t he look like a dangerous criminal to you? He positively reeks menace with his excessively pacifist demeanour and hippy placards.

The arrest of Haw is harrassment, pure and simple. He’s a political dissenter, one of millions of Britons who disagree with Butcher Blair’s warmongering. I am stunned the police can even think they can get away with this flagrant bullying. But I guess it’s symptomatic of Blair’s regime, our rights are eroded every day and the perpetrators claim it’s for our own protection!

For more information on Brian Haw and how our great leaders are scared of one man’s voice, please click here.