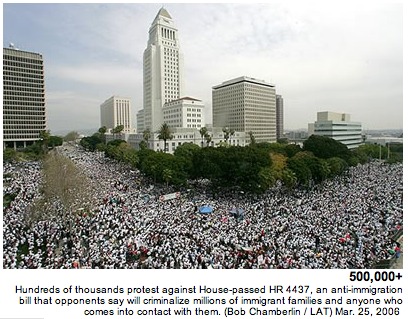 Joining what some are calling the nation’s largest mobilization of immigrants ever, hundreds of thousands of people boisterously marched in downtown Los Angeles Saturday to protest federal legislation that would crack down on undocumented immigrants, penalize those who help them and build a security wall on the U.S. southern border.

What an amazing demonstration! Look at that picture, there’s something surreal about seeing that many people gathered in a political protest, it looks CGI from a film rather than a flesh and blood demonstration taking place now.

HR 4437 is a slap in the face of all the people in that demonstration. It’s also a supremely morally dubious position: it’s basically one load of illegal immigrants pulling up the drawbridge behind them and criminalising their successors. That the US should persecute people so desperate to live the American Dream seems particularly perverse.

In recent weeks, hundreds of thousands of people have staged demonstrations in more than a dozen cities. The Roman Catholic Church and other religious communities have launched immigrant rights campaigns, with Los Angeles Cardinal Roger Mahony taking a leading role in speaking out against the House bill and calling on his priests to defy its provisions that would make felons of anyone who aided undocumented immigrants. In addition, several cities, including Los Angeles, have passed resolutions against the House legislation and some, such as Maywood, have declared itself a “sanctuary” for undocumented immigrants.

“There has never been this kind of mobilization in the immigrant community ever,” said Joshua Hoyt, executive director of the Illinois Coalition for Immigrant and Refugee Rights. “They have kicked the sleeping giant. It’s the beginning of a massive immigrant civil rights struggle.”
(Source: Common Dreams)

I love that phrases, ‘They have kicked the sleeping giant.’ Seems to be happening a lot lately, with the various mass movements of people power organising around the globe.

The ordinary people of the world are becoming increasingly uppity and disrespectful to their masters. What a wonderful time to be alive!