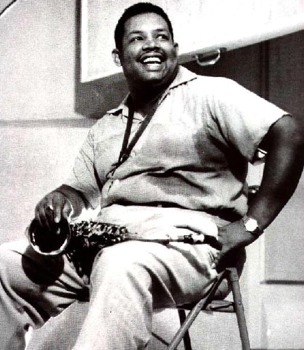 My lovely mrs. came across a riveting article from Playboy published in 1960 where they interview some jazz legends about the links between music and drugs. Here’s an excerpt:

C. ADDERLEY: I’m afraid that I have played with many musicians who were stoned out of their minds and played like never before. I wish it were a truism that if a guy were addicted to narcotics, I could say, “Well, he’s high, he can’t play,” but ….

COHEN: I ask Dizzy point blank – is it possible for a musician under the influence of narcotics to play in an ensemble?

GILLESPIE: I think it is. It’s according to the degree of genius in the musician, I think. Because I know some musicians stoned high and they still can play, but I know some musicians who sit down and they’re high and they’re slobbering all over their instruments. I’ve seen a well-known musician under the influence of narcotics – I know he was high because he was nodding and you’d wake him up and he’d start playing and just play, play, play, play, play – and I’ve seen the same musician under the influence of alcohol and I had to call him off, and say, “Look, think about all your fans out there.” He’s dreaming. He’s going around with a fifth of whiskey all the time, and maybe he’s trying to substitute for the drug by drinking the whiskey. He’s playing nothing – absolutely like a beginner – and I know this guy’s a genius.

HENTOFF: In other words, although we’re not advocating the use of drugs, I think the only way to get a useful discussion of this problem is to do away with what ever moralistic myths we can. And one is the myth that if you’re on you can’t coordinate. It’s just not true.

TAYLOR: I worked with Charlie Parker, and Bird said a couple of times in print that he felt some of his worst performances were when he was under the influence of drugs. And I think this is borne out by some of the records that he made – Relaxing at Camarillo and some things like that – and he was in pretty bad condition on some of those records. He was such a sensitive guy, it’s very difficult to understand how he could stay on dope, because he knew it was suicide, that he was killing himself, but his other personal problems were just such that he wasn’t physically or mentally able to stay off.
(Source: Cannonball Adderley.com)

Fascinating stuff, well worth reading the full article if you’re a musician. Or a drug addict. Or both.