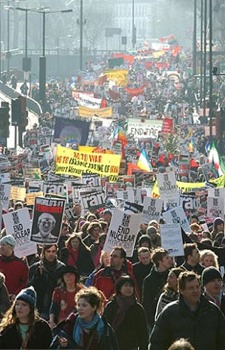 Here is the news, for the BBC-dependent only: A massive demonstration against the occupation of Iraq and the prospect of an attack on Iran took place in central London on Saturday. Tens of thousands of citizens of all races and religions and most political persuasions demonstrated against government policy.

So, naturally, the BBC decided to keep the event a secret on its news broadcasts. Possibly, the browbeaten post-Hutton corporation just couldn’t afford the expenses to get a crew from White City to Trafalgar Square. They can’t pretend they didn’t know the march was happening – they had given John Reid ample airtime to denounce it in advance.
(Source: Andrew Murray)

Nice to see other people picking up the BBC for its pro-war, pro-Blair bias.

I’m going to sound like a broken record here but Saturday’s march was huge. If even one-hundredth of that amount of people had marched in London for any other cause, it would have been the top news story.

But when it’s an antiwar demo – nothing. We’re buried in the headlines and don’t get reported at all on TV news.

You can only do this for so long before you totally alienate your audience. Assuming exactly the same people don’t protest each time (highly unlikely), I’m guesstimating that around three to five million Britons have protested against the war in the last three years.

You can’t lie to that mass of people forever. We know what happened this Saturday and on all the other demos. We know the BBC and other mass media is deliberately ignoring the British peace movement.

The British mass media is becoming as partisan and truthless a news source as those in the old Stalinist Soviet Union.