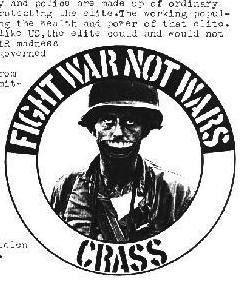 Below is a lengthy quote from one of the best bands ever.

At risk of being seen as the ‘traitors’ that we are, through devious routes we rushed out an anti-Falklands War flexi and were instantly labelled ‘traitors’ by the music press. We also received a severe warning from the House of Commons to ‘watch our step’. Protest against the War seemed to be virtually non-existent and criticism in the press was being supressed. When the issues had been abstract, the Peace Movement had been all too happy to shout ‘No more war’, now there was a war to shout about, the silence was painful.

However it wasn’t until the war had ended and we released How Does It Feel To Be The Mother Of A Thousand Dead? that the shit really hit the fan. After Thatcher had been asked in the House of Commons whether she had listened to the record, it was inevitable that she and her party would want to punish us. Tory MP Tim Eggar had the hapless task of fronting prosecution proceedings and right from the start couldn’t put a foot right. The case crumbled completely when Eggar was exposed by us on live radio as a complete fool. The Tories backed down immediately after his miserable performance and even went to the trouble of circulating a note in which members of the Party were ordered to ignore all provocation from our quarter. Suddenly we started receiving letters of support from members of the ‘Opposition’. Maybe we weren’t on our own. Fall guys or what!

We found ourselves in a strange and frightening arena. We had wanted to make our views public, had wanted to share them with like-minded people, but now those views were being analysed by those dark shadows who inhabited the corridors of power. Eggar had created a great deal of publicity for our cause and the press had lapped it up, especially those who, literally at gun point, had been prevented from gaining any real information on the war. It was as if we’d hooked a whale while fishing for minnows. We didn’t know whether to let go of the rod, or keep pulling until we exhausted ourselves, which we knew, inevitabiy, we would.
(Source: CRASS)

Kind of puts the current wave of mewling, simpering “singer-songwriter” fake protest folkies in context, doesn’t it? Not to mention all the bands I see on MTV shouting very loudly about FUCK ALL. What are you whining about, fake-metal boyz? At least boy bands are honestly meaningless.

Here’s how it is: either you’re an artist who has passion and commitment and wants to change the world or you can fuck off out of my life. I haven’t got the time to listen to the listless bleatings of another generation of sleepwalking drones.

So you can take your tasteful, mature “folk” and your “hardcore” pseudo-metal wankery and shove them both up your fucking arse.