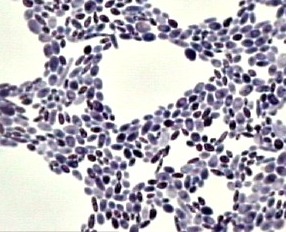 Saccharomyces cerevisiae – Brewer’s Yeast. Would you be here without it?

First, I know many non-geeky types read Bzangy so here’s some jargon-unwrapping:

Symbiosis (pl. symbioses) (from the Greek words syn = con/plus and biono = living) is an interaction between two organisms living together in more or less intimate association or even the merging of two dissimilar organisms. The term host is usually used for the larger (macro) of the two members of a symbiosis. The smaller (micro) member is called the symbiont (plural: symbionts), or alternately, symbiote (plural: symbiotes). When a microscopic symbiont lives inside the cells of a host, it is referred to as an endosymbiont.
(Source: Wikipedia)

And here’s one example of a symbiotic relationship:

“Like everybody else in the cocktail lounge, he was softening his brain with alcohol. This was a substance produced by a tiny creature called yeast. Yeast organisms ate sugar and excreted alcohol. They killed themselves by destroying their own environment with yeast shit.”
(Source: Breakfast of Champions)

Yeast eats sugar and shits out alcohol. When there’s too much alcohol, the yeast dies out, which is why beers and wines only get so alcoholic: to get any stronger, you need distillation. So, spirits are merely concentrated yeast shit.

Right, having got all that out of the way, here’s my totally anecdotal and unscientific argument:

Most people drink alcohol. Most people I know cannot function without drinking alcohol. They’re not alcoholics in the accepted sense but their lives are mediated by alcohol. Most people cannot go out clubbing, go to a party or pass a weekend without taking alcohol. They are totally dependent on it to socialise. They cannot be happy in a social situation without a drink in their hands. I think it’s fair for me to say that merely considering our social lives, I could claim we’re in symbiosis with yeast.

The above is even more true for sex. How many times do humans start a sexual relationship stone-cold sober? Whether it’s drunken teenagers groping in car-parks or fortysomethings on a nervous date, alcohol is always there, loosening their inhibitions.

Why does alcohol lower my inhibitions?
Alcohol is a sedative, and has a depressant action on the central nervous system and damps down your usual protective psychological and social inhibitions. Although this may make you feel euphoric and dynamic, it will affect your judgement, even on things like deciding when you’ve been in the sun too long, whether you are drinking enough water, as well as common sense decisions on sex issues. And on top of that, in small quantities, alcohol is an aphrodisiac – but only for women, it seems. After drinking two units of alcohol, female testosterone levels rise one to two hours later. In larger quantities, however, alcohol lowers oestrogen and testosterone levels so you may feel less sexy as the night wears on.
(Source: iVillage)

So, with women it’s not simply the de-inhibiting effects of alchohol, it actually makes them randier, temporarily. When you see pissed women acting laddish, part of it is because they are more laddish: they’ve raised their testosterone levels.

Let’s add it all up. Alchohol de-inhibits both sexes and also makes female humans more sexually aroused. True, in males, too much can lead to impotence. But would they have even got the chance to be impotent if they hadn’t taken alcohol in the first place?

Humans drink yeast shit —-> Start / have sexual relationships —-> Have babies which wouldn’t have been conceived sober —-> Babies grow up and consume alcohol —-> Which has to be brewed by growing yeast.