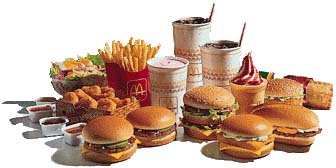 At last, it seems that McDonald’s is losing its hitherto stellar domination of the vast fast-food market in this country. This is not a regional or temporary blip, or a mere tactical realignment. They really are in trouble. Their poor performance in Britain dragged profit margins from McDonald’s European company-owned restaurants down to 14.9% of sales last year – from 15.6% in 2004. No new openings are planned for the coming year. Even McDonald’s European boss, Denis Hennequin, is struggling to put a happy face on the situation: “The UK has been in negative territory for a couple of years now,” he admitted. “The brand 15 years ago was very trendy and modern. It is now tired.”
(Source: The Guardian)

I’m not getting on a moral high-horse here: I’ve bought food at McDs and Burger King when I’m famished in town and too confused to stumble somewhere that serves real food. But for the past couple of years I’ve been consciously avoiding them. When I’m in town now, I tend to end up eating at Higgs, The Bless or Big Blue. Basically, anywhere but the big chains.

Part of that choice is political. I don’t want to give my money to a company like McDonalds, one that bullies and engages in dubious practices to protect its profits:

The verdict was devastating for McDonald’s. The judge ruled that they ‘exploit children’ with their advertising, produce ‘misleading’ advertising, are ‘culpably responsible’ for cruelty to animals, are ‘antipathetic’ to unionisation and pay their workers low wages. But Helen and Dave failed to prove all the points and so the Judge ruled that they HAD libelled McDonald’s and should pay 60,000 pounds damages. They refused and McDonald’s knew better than to pursue it. In March 1999 the Court of Appeal made further rulings that it was fair comment to say that McDonald’s employees worldwide “do badly in terms of pay and conditions”, and true that “if one eats enough McDonald’s food, one’s diet may well become high in fat etc., with the very real risk of heart disease.”
(Source: McSpotlight)

The bigger the company, the more evil it is. This isn’t to say that small companies are any more pure-hearted, they simply haven’t got the economic power to be as evil as their larger brethren.

But leaving the politics aside, I think the chains are losing customers because of taste and price. By the time you’ve bought your extruded, plastic food at a McTrough, it costs as much as and often more than real food from a cafe. And it still tastes godawful and makes you feel bilious two hours later. The only advantage is speed, often lost when you end up at the back of a disgruntled queue.

My pet hypothesis about these closures is that they mark a turning point in British culture. Whereas McDs, KFC, BK and the others epitomised the ’80s and grew in the ’90s, their concepts of food, value and service seem out-of-step with Noughties culture. I’m not saying that every Brit has become a little gourmet in the past few years but tastes are changing. What’s most encouraging is the report that kids are now turning off Ronald:

Kids may be easy to reach and influence; showering them with gifts and attention, and glamorous associations with what is cool and happening in their world can be brutally effective. But kids can be ruthless, too, when the lustre of desirability starts to fade, in turning their backs on the people, the trends – the brands – they once loved. The most devastating news for McDonald’s, and the thing they can do least about, is that they are becoming seriously uncool. A survey published last week revealed that Britain’s teenagers are turning their backs on the Golden Arches in droves. Just 1% of 13- to 15-year-olds said McDonald’s was their favourite meal, down 7% on a year ago.
(Source: The Guardian)

We want good food, we want somewhere clean and comfortable to chat with our mates while we eat it and we’d like our money not to go to rapacious, bludgeoning corporations.