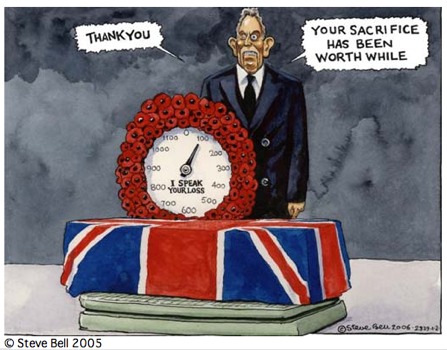 Anti-war campaigners have criticised Tony Blair after he suggested his decision to go to war in Iraq would ultimately be judged by God.

The prime minister told ITV1’s Parkinson chat show: “If you believe in God (the judgement) is made by God.”

Reg Keys, whose son was killed in Iraq, said Mr Blair was “using God as a get-out for total strategic failure” and his comments were “abhorrent”.
(Source: BBC News)

Apparently, Butcher Blair will make his heartfelt confession on Parkinson tonight. I won’t be watching as my telly cost far too much to kick in.

Other guests on the show will be Osama Bin Laden and Adolf Hitler. Here’s a statement from Alastair Campbell, who now does Bin Laden’s PR:

“Tonight, Osama will open his heart to Parky’s viewers. Yeah, the bloke’s got a lot of flak for flying planes into the WTC and causing a certain amount of what the US military calls ‘collateral damage.’ But he really believes in God. He believes that God is telling him that he should go and kill as many non-believers as possible. I tell you, I nearly shed a tear when I heard the strength of Osama’s faith in god. You can’t help but be moved by his conviction that somewhere there’s a giant, all-powerful ghost who wants him to kill people in his name.”

Viewers will also be treated to some soul-searching from Mr. Hitler (also now handled by Alastair Campbell). I can present you with an exclusive snippet:

(Hitler)(turning to Tony Blair)”Tone, Tone – you’re exactly right! I know that people have protested against my leadership of Germany and my final solution but I was always carrying out God’s work! After all, it’s the Jews that killed God’s son! Only God can judge our actions!”

(Adolf) “That’s Jewish propaganda! Jesus was obviously German, an Aryan! I know this because God told me!”

(Blair) “Also, people forget how much Adolf clamped down on yob culture, something I’m trying to do in Britain now. His SA didn’t tolerate anything but RESPECT! Innit?”

(Hitler) “And I made the trains run on time! Don’t forget that, Tone.”

(Blair) “You’re a tough act to follow, but I’m doing my best, mate. ID cards, every citizen watched by hundreds of CCTV cameras a day and scaremongering about Muslim terrorists to keep the sheep… er… population docile and fearful. Of course, Binny helps me out with that. When the fear level drops, I just give him a ring and he pops a VHS in the post to Al Jazeera.”

(Hitler) “Yeah, you’ve done a lot for the cause of killing people in the name of God, Osama.”

(Bin Laden) “Ta, Addy. And yet, when I tell the filthy Western infidels, no offence, why I am killing them in God’s name, they get shirty with me! Innit marvellous?!”

(Blair) “I know just how you feel, Binny. All I’ve done is helped kill 100,000 Iraqi civilians and what do I get? Critics! They’re even marching in London, MY CITY, against me in a fortnight! I blame the lefties, it’s those socialists you have to watch.”

(Hitler) “Oh god, yes! The bleeding heart liberals! All I’d get was, ‘don’t kill the Jews, Adolf, leave the gays alone, why are you shooting all the shop stewards, don’t put us all in concentration camps.’ There’s no pleasing some people.”

(Blair) “But you made your mark, Addy. I’m very concerned how history will view my reich…er… premiership. But in end, aren’t we all agreed that only God can judge us?”

(Bin Laden) “Innit? We’re beyond the ken of ordinary mortals.”

(Parky) “Lovely, lovely… well, join me again next week when my guests will be Pol Pot, Stalin and Ceausescu chatting about how a deformed workers’ state is better than no workers’ state at all. And now, to play us out, please give a big hand for JAMES BLUNT!”

(Blair) “Smashing, smashing! One of my faves!”

There you go. No reason for you to watch now.